These Local Acts Dominated the Stages at LouFest's Most St. Louis-Centric Event Yet

Whatever else there is to say about this year’s LouFest, it was, without a doubt, the most St. Louis-centric in the festival’s now seven-year history.

2016’s was the first LouFest in three years to be produced exclusively by Listen Live Entertainment, the company responsible for founding the festival in 2009. Listen Live had been partnering with festival giant C3 Presents (the company responsible for Lollapalooza and the Austin City Limits Music Festival, among several others) since 2013 in order to bring in bigger names to headline the annual event.

Luckily, LouFest has since gained enough of a national reputation to bring in heavy-hitters such as LCD Soundsystem, Chris Stapleton and Ms. Lauryn Hill without C3’s help.

In addition to the return to exclusively local planning and production, this year’s LouFest featured more local acts than ever before. With seven bands from right here in St. Louis, local representation at this year’s fest was more than double that of last year’s, which featured only three St. Louis-based acts.

Not only were more local acts featured, but this year’s schedule made it possible, for the first time in LouFest history, to see all of the locals on the bill — in contrast to every previous schedule, which placed local acts in overlapping time-slots.

In honor of the Lou-iest LouFest so far, we’ve put together this round-up of all the great local artists that helped put the “Lou” in LouFest.

[image-8]
Americana duo the Sleepy Rubies and their backing band kicked off the festival on Saturday, playing to a shockingly large group of LouFest revelers given their opening spot on the schedule.

“We were pretty surprised,” says Emily Wallace, whose smooth-yet-powerful voice both contrasts and blends impeccably with the raspy alto of sister Ali Ruby — the other half of the Sleepy Rubies — continuing proudly, “We had a couple hundred people out there.”

Though the group was forced to cut their set short due to the festival’s delayed opening, they still managed to fit in a new song written only two days prior, which both the duo and their backing band played seamlessly.

Photo by Steve Truesdell
Next, local favorites Foxing brought their angsty energy to St. Louis for the first time since the band returned in May from a brief European tour. Since then, Foxing has played a handful of festivals throughout the U.S., but guitarist Eric Hudson says that much of the group’s time has been spent writing and preparing for their next record.

“It’s a busy time for us, but it seems like we’re not doing anything publicly,” he says.

While he says the group was excited to head back out on the road in October, Hudson also confides that Foxing’s members have relished the opportunity to reconnect with their home-city and home-lives.

“When you’re gone a lot you just kind of become a different person, you know?" he says. "We’re just enjoying being home.”

Photo by Steve Truesdell
Celebrating their tenth year together since meeting in the halls of University City High School, iLLPHONiCS took LouFest’s Shade Stage Saturday afternoon to get festival-goers moving with their heavy-grooving live-band hip-hop.

Unlike the rest of the locals on the bill, lead vocalist and emcee Larry Morris says that it was iLLPHONiCS who sought out the festival, rather than the other way around. After discovering that an acquaintance of his was involved in the planning, Morris reached out about the possibility of performing.

“I was like, ‘Hey, is it locked up? Is it done?’" Morris says. "He said ‘Pretty much for the year, but it probably wouldn’t hurt to reach out to them.”

So that’s exactly what Morris did. Turns out, the festival’s planners had already been considering the group, and asked if they were available.

“I didn’t even think, I just said yes. I didn’t call nobody, I didn’t confirm work schedules, I was like ‘YES WE’RE AVAILABLE.’”

Photo by Steve Truesdell
Next up was Bruiser Queen on the Tunespeak BMI Stage.

The group seemed exceptionally at-ease, with drummer Jason Potter engaged in laid-back banter with the audience.

Potter says that while he initially felt a bit nervous at the prospect of playing in the unfamiliar environment, “Once we saw who was gonna come over and what kind of people were around, it was like, not only do we recognize a lot of these folks, but everyone was just kinda having fun and chilling.”

He continues, “People were getting down and a few songs in it was just like, ‘Oh this is just like any show.’” 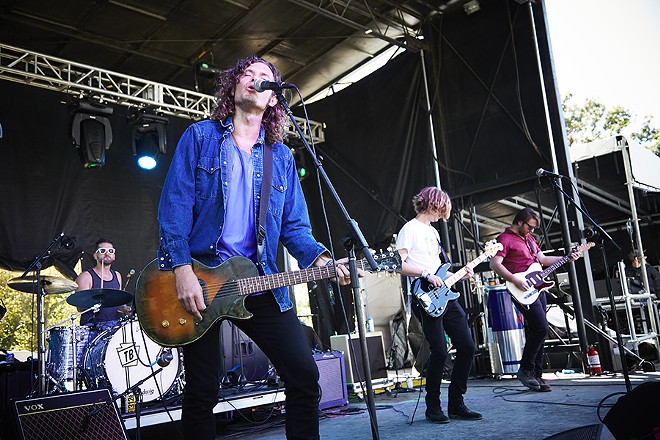 Photo by Steve Truesdell
John Henry & The Engine kicked off day two of the festival with their Springsteen-esque brand of melancholic-meets-anthemic electric Americana. While they didn’t fare quite as well as the Sleepy Rubies when it came to early turnout, the crowd did swell from less than 50 to over 150 listeners during their approximately 45-minute set.

Aaron Kamm and the One Drops

Photo by Steve Truesdell
Aaron Kamm and the One Drops are no strangers to the music festival environment. “I think we did like fourteen festivals this year. We love playing festivals, man, it’s super fun,” says drummer Sean Raila.

It’s no surprise that Kamm and company do well in the festival environment given their psychedelic sound, which blends the sunny sounds of Toots & the Maytals, the rollicking blues-rock of Stevie Ray Vaughn & Double Trouble and the jazzy, bombastic intensity of the Jimi Hendrix Experience.

In fact, LouFest wasn’t the group’s first festival this week. “This weekend was a rough one,” Raila says, going on, “We did Lincoln, Nebraska, to a festival outside of Minneapolis, to last night in Des Moine, Iowa. We left there about 3 a.m. and then got here around 8 a.m.”

Despite the lack of sleep, Raila and bassist Andy Lee Dorris laid down rock-solid grooves over which vocalist/guitarist Aaron Kamm alternated between crooning and wailing, garnering a larger and larger crowd as the set went on.

Photo by Steve Truesdell
The final St. Louis act of the weekend, Karate Bikini put the full force of their seven-piece lineup to work performing a set rich in pop and rock influences, from Bowie to Blondie to the Talking Heads, even touching on the kitsch of Neil Diamond.

Despite the discernibility of their many influences, the group of seasoned musicians manages to blend them in a way that never comes across as coarsely derivative thanks at least in part to the sheer quantity of recognizable sounds sprinkled throughout their songs.

While this wasn’t Karate Bikini’s first outdoor gig, it was their first festival, and they seemed pleasantly surprised by the turnout. Bassist and primary vocalist Tim McAvin summed it up, saying, “You know, we regularly play for twelve people, so… it was a good crowd.”