Photo by Theo Welling
Mathias and the Pirates performing live on Saturday. See more photos from the festival at our slideshow here.
Yet again, LouFest 2017 proved that St. Louis's musical talent can go toe-to-toe with some best acts touring the nation.

In addition to the six local acts who managed to get their very own slots on one LouFest's three stages over the weekend, this year's LouFest showed that St. Louis's homegrown talent can hold its own even while sharing the stage with bonafide superstars.

Saturday evening, locals including Michael "Big Mike" Aguirre, Pokey LaFarge and keyboardist Dave Grelle shared the stage with members of the Roots, Soulive, Lettuce, the North Mississippi All-Stars — and even Huey Lewis himself — to pay tribute to the late Chuck Berry.

On Sunday, Aaron Chandler (trombone), Adam Hucke (trumpet) and Ben Reece (saxophone) of the Funky Butt Brass band joined Robert Randolph (with whom they had previously recorded on a track by fellow St. Louisan Brian Owens) and his Family Band for a rollicking, high-energy set fluidly mixing covers and originals medley-style, with improvised transitions.

While there were only six local acts on this year's bill (compared to last year's seven) and two of them occupied overlapping time slots, this year's locals presented an excellent cross-section of what the city's scene has to offer.

Mathias and the Pirates

Longtime local act Mathias and the Pirates kicked off the festival weekend on the Enterprise Stage with their reggae- and rock-influenced brand of live-band hip-hop. After a late start, the group — which, with eleven members on stage, could probably man a small ship — wasted no time. From the first beat, the crew maintained a high level of energy. For one tune, Stan Chisholm (a.k.a. 18andCounting) hopped on stage to join the musicians, swelling their number to twelve and kicking the energy up to eleven.

Despite some issues with vocal intonation early on, as well as a few rough moments finding their way through transitions during new material, the group seemed confident and at ease throughout, with the band using visual cues to navigate their way through the murky waters of the newer arrangements.

Photo by Theo Welling
Next up was Mvstermind (Muhammad Austin) on the Bud Light Stage, joined by his newly formed band of young phenoms, including sixteen-year-old keyboardist Owen Ragland, who just released his debut album last week.

Unfortunately, and owing to no fault of the band, the set was plagued by technical difficulties, including no fewer than three microphone failures. On another occasion, the backing track accompanying the group simply stopped playing, leaving the players visibly confused. Thanks to the high level of musicianship among the young band, though, the members managed to collect themselves within a matter of seconds, improvising their way through the rest of the song to a strong ending.

Despite the issues with their first performance, Mvstermind's charismatic presence, along with ambitious arrangements and an excellent group of young players, make this band one to watch. 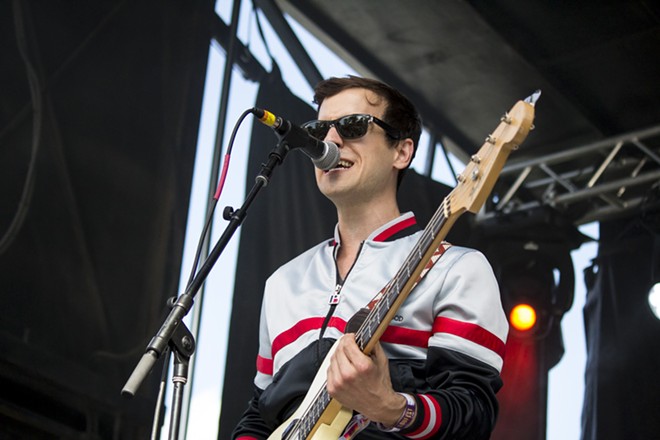 Despite having only two singles and the same number of live performances under under their belts as Starwolf, the trio of Chris Rhein on vocals, bass and guitar; Max Sauer on keyboards and guitar; and Tim Moore on drums managed to nail down a surprisingly late 4 p.m. slot on the Festival's BMI-Tunespeak Stage.

Though Starwolf is a relative unknown, the band delivered what might have been the tightest set among all of the weekend's local acts, with the exception of Sunday's performance by 18andCounting and TheOnlyEnsemble. The strength of the performance is less surprising considering that the three played together in local favorite The Sun and The Sea for nearly a half-decade before forming Starwolf. Both Sauer and Moore also played in Springfield Illinois' the Graduate, which played large festivals including Lollapalooza in its heyday.

Photo by Theo Welling
Beth Bombara led day two of the festival on the Bud Light Stage with her tightly rehearsed band consisting of Beth herself on vocals and rhythm guitar, Samuel Gregg on lead guitar, Kit Hamon on bass and backing vocals, and Ben Majchrzak on drums.

Though they did encounter some issues with mic feedback, Bombara and company managed to mostly avoid the sound woes that many of the acts performing on that stage faced, thanks to a stripped-down instrumentation and expertly dialed-in sounds on amplifiers that had been modified by Hamon just the night before.

Grelle's lyrical mix of sharply progressive social commentary with love songs and other less politically-charged subject matter — though it has precedent in the music of artists like Woody Guthrie and Steve Earle — seemed to both intrigue and confound the largely unfamiliar audience.

While Grelle and company were serving up swinging honky tonk and waltz grooves on the Bud Light Stage, 18andCounting (Stan Chisholm) and his backing band, TheOnlyEnsemble, were laying down oppressively heavy backbeats on the BMI-Tunespeak Stage. Violinist Sarah Vie played looping phrases, subtly creating tension by repeating notes ever-so-slightly out of tune.

Undergirded by bass work from Brennan England on his self-made slide didgeridoo, the group's sound was pitch-dark and brutally aggressive — making it easily the most sonically provocative performance of the weekend.

TheOnlyEnsemble's decidedly DIY visual aesthetic also diverged sharply from the rest of the weekend's performers. Chisolm modified his vocal signal with an array of pedals sitting atop a plywood plank spray-painted yellow. Elsewhere plastic milk crates — some black and some likewise painted yellow — served as stands and tables for accessories.

All in all, the set was both visually and aurally a welcome departure from the rest of the festival's more glossy performances.