This Band Could Be Your Life, Part I: So Many Dynamos Tours to SXSW

[In weeks leading up to and after SXSW, bands route their tours toward and away from Austin. One of these groups is St. Louis' own So Many Dynamos, a band whose spiky keyboard-rock, gnarled riffs and complex time signatures call to mind everyone from Q and Not U and Pattern Is Movement to Battles and Broken Social Scene. The quartet will be playing a house party on Wednesday, March 12, and at 4:30 p.m. on Thursday, March 13, at the Billiken Club's stage at the Twangfest/KDHX party at Jovita's (1619 South First). Guitarist/Riverfront Times freelancer Ryan Wasoba was kind enough to keep a diary of the band's first few weeks on the road to Austin. Stay tuned for two more installments of his observations in the coming days.] 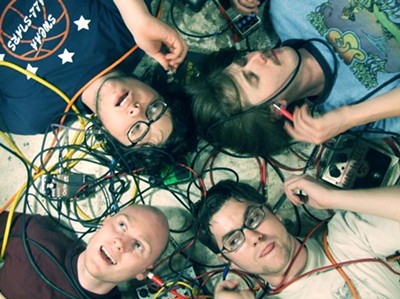 "Cool" is a relative term -- and its perception varies by geography. New York is cool for thousands of legitimate reasons. Los Angeles is cool because it’s where they make movies, and tall buildings that house failing record companies live there. Seattle is cool because some dudes wore flannel, broke guitars and knocked Michael Jackson’s Dangerous down to No. 2 on Billboard in 1992.

The Midwest has not contributed as much to American culture and is not generally considered cool. But this lack of coolness grounds the people of the Midwest; the area isn't cool, so the people that live there have to be cool to make up for it. This, along with my hometown pride, is why I think people in the Midwest have less of a tendency to completely suck.

The tour begins in Omaha, Nebraska. Omaha's claim to coolness is Saddle Creek Records: Bright Eyes, the Faint, Cursive, etc. We are playing at Slowdown, a venue recently opened by the folks at Saddle Creek. The Show is the Rainbow, our friend Darren Keen's multimedia one-man band, plays with us. Everybody is very kind and there is very little pretension. A band called UUVVWWZ (pronounced Double-U, Double-V, Double-W, Z) plays and they are rad and certainly into cooler music than I.

Sioux Falls, South Dakota is a similarly uncool-and-therefore-really-cool Midwestern town. There is a tour bus outside of the show, which is odd because we are headlining. We play the 6 to 9 p.m. early show along with We All Have Hooks For Hands, the resident ten-piece/two-drummer band with horns. The late show (and tour bus owners) are called Cinder Road. They have two techs, a tour manager, and a traveling soundman. Their two merch girls sell shirts, CDs, panties, customized guitar picks and 8x10 glossy photos. They are L.A.-cool, which is Midwestern for "trying to hard to be cool and therefore not cool at all." I think they played to eleven people and they probably stayed in a Holiday Inn Express.

We take backroads from Sioux Falls to Denver because a British woman's voice on our GPS told us to. This means we don't have to drive past the spot on I-80 where our van flipped over last year. Two hours outside of Denver, we pass a white Dodge Sprinter with a trailer driven by and filled with dudes. With a sharpie and a notebook, we ask them what band they are. They are Finch. This is funny to us at the time, and still is now.

Finch is an emo band. Emo, despite its many incarnations, was a highly Midwest movement, and the late-'90s Midwestern touring-machine emo band is a model that we've followed for years. This is why I think So Many Dynamos has more in common with the Get Up Kids and Braid than most of the bands we share stylistic comparisons to. Modern emo, in all of its guyliner/combover glory, is a bastardized, sloppy conglomeration of Midwest angst and L.A. cool.

At a standard house show, people drink beer and sneak off to smoke pot. In Denver, at the house we played at, people openly smoke weed and sneak off to (apparently) do other drugs and (we suspect) have threesomes. The Photo Atlas plays after us, people dance, and all is well. People in Colorado are not so much "cool" as they are "chill," which makes them somewhere between 40 to 110% hippies.

We wake up in a mountain. We play at a college in Boulder and the opening band is very young. It is their first show. We debate the gender of the keyboardist; either a girl going through his awkward phase or a boy going through his very awkward phase. We play the college because they pay us more money than they should to play there, and we are bummed because they're sending a check to our house. This is a good thing in the long run, because two weeks from now in Oakland I will drive our van with the gas pump still in it, damage the gas station's hose, and we will have to pay the damages. These damages are the same price as our payment for the show, which is comfortably sitting on our coffee table 900 miles way.