Thor Fox Will Beat You at Big Buck Hunter 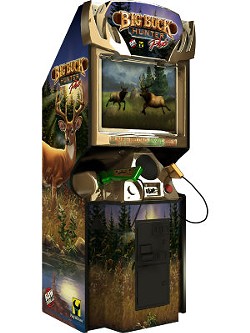 It's Monday afternoon, and Thor Fox is stationed at Buffalo Wild Wings on Olive, indulging in his favorite hobby: Big Buck Hunter.

You can find Big Buck Hunter tournaments tonight at Hair of the Dog. The Big Buck Girls (as seen in the game!) will be on hand, cheering on competitors and handing out prizes.

"It's a strange group," said Fox of the Big Buck Hunter community. "It's not a bunch of rednecks--well, there are a bunch of rednecks--but it's not just rednecks. One of the guys that's a top player is a TV marketing executive in New York City, and there are girls too. I don't know what it is about you women. You start playing something where it's okay to kill things, and 15 minutes later you've got the eye of the tiger and you can't stop. It's impressive and sexy and scary all at the same time."

Fox, a 27-year-old St. Charles native, is a regional champ and a celebrity in the Big Buck Hunter world. You can find his name and high score among the winners on Big Buck Hunter in four different states.

A glimpse into the world of competitive, humane deer slaughter! Fox is at 4:34.

"I play my friends and we play for money," Fox said. "I kind of kick their butts and play for free. We haven't been playing for money as much because after couple months of just giving it to me, I think they got tired of it. It's a habit that completely pays for itself. Which is good, because most addicts can't say that."

Fox has been to the championships before; last year in Chicago he placed 31st. (He admits this was a poor showing.) However, he had to drive to Michigan before competing and arrived at the competition in Chicago 20 minutes late: He'd forgotten to allow for the time change.

"It was a strange feeling because everybody knew me. They couldn't let me compete because they already finalized the brackets, instead they just bought my tab for the night. I went up there with $60 for gas on the way home. Somehow I paid cash for a hotel room that night, paid cash for my tab after they left, and woke up with $200 bucks in my pocket from playing guys. I can't remember the whole night but it's the most awesome feeling in the world to pull out this wad of cash out of your pocket in the morning and go, 'I must've done alright.'"

His strategy for preparing for the Worldwide Championships? "A lot of Gatorade, a lot of push-ups, high protein breakfast," Fox said with a laugh. "No, nationals is kind of--hydrate, hydrate, hydrate, because it's open bar for 2 nights. If you win you tend to celebrate, and if you lose you tend to drink it away. Splash a little beer in your face and you're ready to go. It's a drinking game. I don't recommend doing this without alcohol."