Tom Huck On His Roots Phrenology Cover and Motorhead 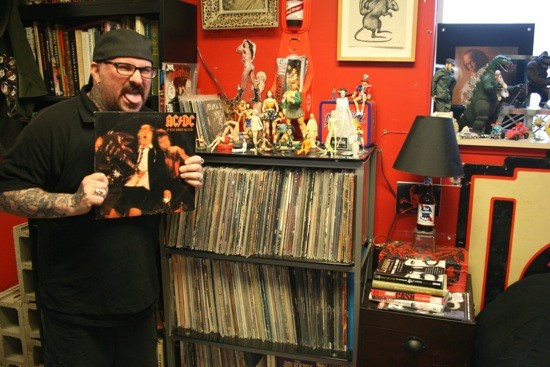 Many artists have used the album cover as a vehicle for greater mass exposure. Robert Crumb transitioned from the obscurity of underground comics to mainstream consciousness with his cover of Big Brother and the Holding Company's Cheap Thrills. Derek Riggs made his mark on the world by creating Iron Maiden's legendary mascot, Eddie the Head. Even pop art provocateur Andy Warhol is arguably best known for his iconic album covers for The Velvet Underground and Nico and Sticky Fingers. Local artist Tom Huck has had some parallel success: In 2002 Huck designed the cover to The Roots Phrenology, bringing his unique woodcut engravings to its largest audience ever. We met Huck at Evil Print Studios where his staff was in the process of organizing his CD collection and getting ready for a woodcut workshop. There we discussed the story behind Phrenology, his original cover of Appetite For Destruction and everything Motorhead.

Last Collectory Standing: How were you approached to do the album artwork for the Roots' Phrenology?

Tom Huck: I was teaching at the time. Somebody from the record company called the school. They saw my work in gallery in LA and called me up. The funny story is the secretary brought me a post-it note that said call MCA Records immediately. I thought, "Oh my god, they fucking got me for downloading music!" [Laughs] I went and deleted all my iTunes that night. I'm paranoid.

Along came the time that I had to call 'em. This designer wanted to talk to me about doing the album cover for the Roots. I didn't know who they were.

That does not sound good to a record collector. That was CDs falling, while I'm being interviewed [for] a record-collecting column. Okay, typical day at Evil Prints.

So, I didn't know who they were. I'm a metal guy. I don't listen to much hip-hop. My hip-hop interest stopped at Public Enemy. They did that stuff with Anthrax. But it was kind of good that I didn't know. Once I got off the phone with the lady, I went back into my class and asked the kids if they had ever heard of the Roots. They were like, "Oh my god, the Roots!" Then they sent me a stack of CDs and I was like, "Wow, these guys are great." They're a band. I was into it right away. I'm a fan. I love what they do.

It was very chaotic doing it. We were doing faxes of my approved drawings. The band wanted a certain look and they wanted me because I do that antique look of woodcut. There's that age-old look to my stuff. They wanted those old phrenology drawings of the head. They had a list of the faculties that they wanted to go into the brain.

I designed it as an LP cover. I was a little bit freaked out because one of the stupid things I forgot about was I didn't design it with idea of the damn parental advisory sticker. I hated it when I saw it on the CD. I just hate that stupid sticker. Other than that, I designed it with the spirit of an LP record. What was cool was seeing it when it came out on vinyl.

I have a love for the packaging of records. That's the thing that's lost with CDs. Now it's not even CDs, it's just an iTunes image that's as big as your thumb tip. That pisses me off, because part of the experience for me when I got into music when I was young was like that Black Sabbath record. Black Sabbath Black Sabbath. You get it and put it on and are freaking out because it's scary. You're looking at the picture and the gatefold. They're a bunch of scary dudes. You had a visual experience with the albums [as well as] an audio experience. It went together for me.

When the Roots ask me to do that stuff I asked them if there was going to be other packaging. [They also wanted an] insert where I did portraits of the band members. That was up my alley, because I knew it was going to come out on vinyl when they were talking about doing an insert. I was more excited about seeing it on vinyl. It was a major label release. You don't ever get to do that, really. It's one of those things. I make my living selling my prints to museums and collectors, but I get asked about that record once a week.

I was at a show in San Francisco. This guy came up to me, "Did you really do that Roots cover?"

He looked at me and said, "That's iconic."

I was just taken aback by that. It's my widest known piece of work. I'm okay with that, because when the Roots go into the Rock n' Roll hall of fame, which they will because they're an innovative group, I'm really honored to be a part of their history. Not a lot of people get to say that about a band that big that's good. It's not like doing a fuckin' Brittney Spears album cover.

I'd be blown away if she knew to ask you to do her covers.

I would do some pretty cool shit for her. Britney likes to whore it up. Well, I'm your guy! [Laughs]

The Roots' Phrenology went gold and you have a gold record on your wall. What do you think is the significance of having a gold record nowadays?

The only way you can get an RIAA [gold record] is to be a performer. [Mine's] not an official gold record. That's something that people that work for the company get, but they're not the same ones. I was comped one because I did the [cover].

It's an honor be a part of something that was that big. There's nothing like that association. Some of my favorite art came from records. Derek Riggs. Iron Maiden. Derek Riggs is probably one of the most famous artists in the world. It's just not art world famous, which is a laugh. Who gives a fuck about the art world? My art education came from regular art history and Derek Riggs. He influenced me just as much as Albrecht Dürer, my main hero. Joe Petagno who came up with the Motorhead album covers. Those are in my brain forever. Those are visual icons from my childhood.

Def Leppard Pyromania, dude, I used to sit their and look at that record. When I hear those songs I think of the album cover. It's cool to effect people with your work that has an audio accompaniment to it.

Where did you start collecting records?

At Venture stores in south county. The first record that I every convinced my mom to buy me was Kiss Alive II, which I still have. The second record that I bought with my own money was Def Leppard Pyromania. Most hardcore metal-heads would be like, "What!? Pyromania, man?" That's a great freakin' record. All metal-heads love it. They just don't want to admit it. I'll admit it because I'm not a pussy.

I started collecting records in 77, when I was like 6 or 7 years old.

Do you have an all-time favorite album cover?

[Huck goes to look for the record. While flipping through his stack he has trouble finding his all time favorite album cover.]

This is my number three favorite album cover. I'm going to count them down for ya. Iron Maiden's self-titled album. That's Eddie's debut.

This is my number two favorite and it's the way it originally came out. Guns N' Roses Appetite For Destruction. It's the Robert William's one. That [album cover] was pulled by the record company.

There's this tattoo artist at All-Star Tattoo named Ed Rook. It turns out that Ed was a senior when I was in 8th grade at Potosi High School. Ed was in a band called Rook. He went out to LA in '86 to be in the metal scene. It was huge news. This band from Potosi.

Years and years go by, [I] lost track of him. I think the business was really hard on him. He came back here. I had never met him, but I had a show at the St. Louis art museum and Ed's wife was one of the front desk people. She came up at one of my talks and said her husband was from Potosi and his name was Ed Rook. "Ed Rook, awesome!"

He came to one of my other lectures I had there and then he took a class here at Evil Prints. We started bull-shittin'. We hit it off right away because we're from the same hometown [and] have the same interest in music. He told me he really wanted to buy one of my prints, but he couldn't afford it. He asked if we'd do trades.

One day he came into the studio with a paper sack under his arm. The night his band arrived in LA [in the '80s] they went to either the Whiskey A Go Go or The Roxy. I can't remember which one it was. There was this band playing called Guns N' Roses and they were totally unknown. Ed went over to their table and bought, from their girlfriends who were selling their records, the original Appetite For Destruction with the original cover and Live Like a Suicide, which was their Live EP.

My favorite album cover of all time is AC DC's If You Want Blood You Got It. It's got Angus on the cover and he's stabbing himself in the stomach with a guitar. I thought when I saw it, "That's real!" I believed it because I wanted it to be true. It seemed like I shouldn't have been looking at it.

It's a live record. You sit there and you look at the album cover. You're playing the soundtrack in the background. It's like [whispers], "He really did this. At the end of the concert he stabbed himself in the stomach with his guitar."