Tonight: What Made Milwaukee Famous, Black Joe Lewis at Off Broadway! 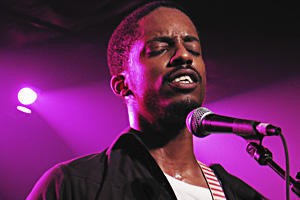 Tonight at Off Broadway is a super-great bill: Besides locals Gentleman Auction House, Lou faves What Made Milwaukee Famous (touring behind the new album What Doesn't Kill Us) and Austin's Black Joe Lewis. Roy Kasten interviewed the latter in this week's paper and described Lewis thusly:

Black Joe Lewis is the black sheep of a soul revival led by accomplished veterans like Sharon Jones, Bettye LaVette and Charles Walker. He’s young (27), has never had anything close to a hit — “Bitch, I Love You” is his most notorious tune — hails from Austin, Texas, and tours with indie rock bands like Mates of State, What Made Milwaukee Famous and Spoon. He’s only been playing guitar for five years, and while he has heroes — Don Covay and Lightnin’ Hopkins — he and his eight-piece band the Honey Bears know that they’re a garage group playing soul and funk, with no pretensions beyond rocking that funk as hard and loose as they can.

Lewis recently finished a record (which was produced by Spoon drummer Jim Eno) and will likely sign with a major label named after a Hank Williams song (written by Leon Payne, rhymes with Frost Byway). He filled B-Sides in on how he got to wherever he is today.

Thanks to the band, we have a stream of a new song from those recording sessions. Check it out below. After the jump, take a listen to a new WMMF song, for good measure.