Top Thirteen Signs You Know You're at a Metal Show

Heavy metal hasn't changed much in the 30 or so years it's been played by long-haired rockers.

Zillions of T-shirt designs help bands stay afloat in the era of digital downloads. And up front, cell phone cameras are just as visible as headbangers. Sometimes fans are headbanging and snapping pics of the sweet riffs -- at the same time.

Here's a rundown of positive, without-a-doubt signs you're definitely at a metal show. I've included thirteen, because of its unlucky, bad-ass reputation among numerals. But feel free to throw out some more in the comments.

Here are some photos from Tuesday night's At the Gates/Darkest Hour/Municipal Waste/Toxic Holocaust show at Pop's to help get the message through the most beer-bruised brain.

13. Rock horns, the metal sign, whatever At it's most basic, raising your index and pinky fingers to the sky means one thing: I'm rocking. However you do it -- at a fellow hesher as a silent agreement that this band fucking rules -- or just to the sky during a metal solo, when you see these in the air, just give it right back. The rock horns are all the way back at thirteen because of their popularity among non-metal posers. 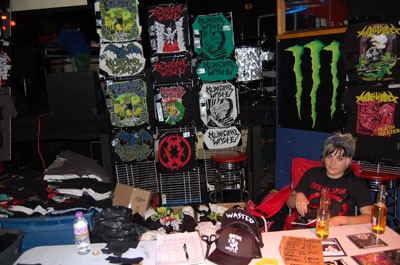 12. Merch! Over the years, and especially since about 2000, metal T-shirts have become more than just a way to show your support; in fact, they've started to function as a uniform of sorts. So the designs multiplied like rabbits, as an easy way to make more money on tour and to give fans some variety in their uniforms. It's also a way to avoid wearing the same shirt as another guy to a show, which can be a tad awkward when his girlfriend mistakes you for him. And he sees you.

11. The cell phone camera It's at more than metal shows, for sure, but it's sometimes the only sign that the metal show you're attending is happening in 2008, not 1988.

10. Drunk road-trippers It's a Tuesday. They drove 90 miles to get here. They have to drive back as soon as the show is over. But they will tell you about their drive and anything else you ask them because they know no one else at the show and are generally friendly. You just wish they'd lay off the sauce before they hit the Interstate in an hour. (This could also be applied to other concerts, sporting events, family reunions and funerals.) 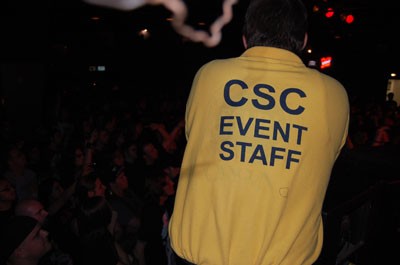 9. Security guy Depending on the show, this fella will have his hands full -- dealing with cranked-up amateur boxers -- or be downright bored. On this night, most of the crowd (about 300) was satisfied with keeping the circle pit going and headbanging along. 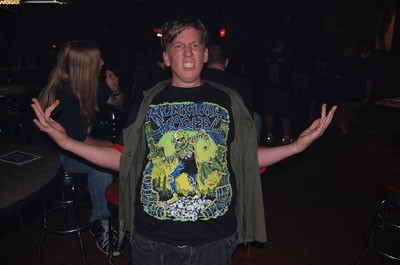 8. Wearing the shirt of the band you're going to see Whether it's a song about torching a village or about feeling unified in a world that hates you, there is something about a great metal band that makes you proud to be a fan. So proud that you wear that band's shirt to their show. When you see another rager with that shirt, it's like you're part of something bigger than yourself.

7. Pit Monsters They're shirtless. They sport dog tags. They display unresolved aggression, although their actions are also slightly homoerotic. The pit monsters will take over a space on the floor with a flurry of chest bumps and half-punches. Only at a metal show will this spastic testosterone go down. One can tell if they are in the presence of pit monster if said pit monster uses the term "slammin'" or "pittin'" to describe their after-work rumbles.

6. Prop it up If you're shredding through a squealing solo worthy of an "Angel of Death" comparison, or finger-tapping away at your own homage to Van Halen (not exactly metal, but you get my point), you must prop your leg up on a monitor in a show of purely masculine exertion.

5. Smoke machines that fog the entire venue It provides an atmosphere that a light show can't match. The swirling smoke invokes mystery, drug-use, evil ... and chance for a mediocre band to take the focus off their poorly executed ballads.

4. Profanity and/or anti-religious themes The shirt on the left is a God Forbid shirt and the shirt on the right is a Danzig shirt. Profanity on shirts is not only accepted at metal shows, but encouraged. It's also a chance to wear a shirt that would be unacceptable at virtually any other public place -- unless that public place makes most of its money on alcohol (bars, other clubs). Though it's always an eye-catcher, profanity on shirts remains a regular, if rare, sight.

3. Vests Culled from a biker tradition, these vests (denim is preferred over leather) are pretty cool, despite one's opinion of heavy metal. Detailed with patches and studs, they differ from regular punk garb only slightly. The most visible way to know if you're at metal show.

2. Long Hair Don't think hair matters that much at a metal show? Many would disagree; just think back to the outcry that occurred when the members of Metallica cut their hair. And was it a coincidence that soon after the chop, its music became terrible and the members were revealed to be douchebags? Long hair is a sure sign you're at a metal show -- whether it's in dreadlocks, straight or curly.

1. Headbanging Not like what you'd see a schmuck do a Disturbed concert. I'm talking about placing both your elbows on the barricade (to solidify your stance) and shaking your man (or woman) mane in time with the buzz saw guitars and demon-like vocals.