Top Turntablists Face Off Tonight at the Old Rock House

Tonight, eight of the city's top DJs will take to the turntables for a battle royale, to find out which one of them is the crowd pleasingist, party-rockingist DJ in the Red Bull Thre3style competition. The line-up features some of the most familiar names on the local circuit: A-Flex, Costik, Hugh Tyson, DJ Kue, DJ Mahf, DJ Sinamin, DeadasDisco and DJ Uptown. 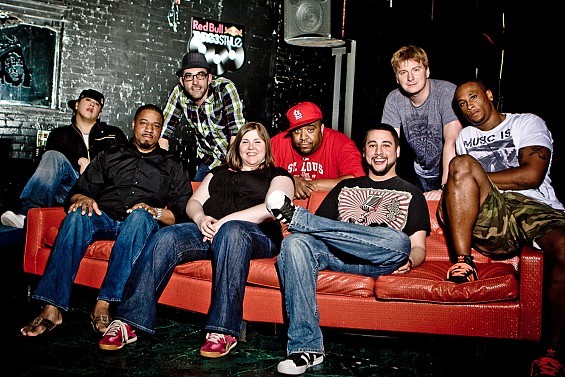 "It's a great opportunity for the St. Louis DJ community to get a little national spotlight for a while," DJ Mahf says. "I think because we're in the middle of the map, we get overlooked a little more."

St. Louis was one of fourteen cities chosen to host the international event series. The contender who cuts and scratches his or her way to the title in the River City will go on to compete at the U.S. National Finals in Denver. Whoever wins in Colorado will go up against the world's best in Paris, France.

Veteran DJ (the man has been in the game since he was twelve) and Hot 104.1 host Charlie Chan Soprano will host tonight's proceedings at the Old Rock House. Familiar names dot the judges table as well: DJ Lord of Public Enemy, Scotty Mac of Black Science, Post-Dispatch music critic Kevin Johnson, DJ Alejan and DJ Spider. (The latter will also perform a special set after the battle.)

And of course, it wouldn't be St. Louis unless everybody knew each other: A-Flex learned from Soprano; the two have known each other for a decade. Mahf and Sinamin used to hold down Mondays at 609 together, while DeadasDicso, Mahf and DJ Uptown are in the same DJ collective.

"Its funny, because we're all friends," Mahf says. "All of us know each other, we've all played together. We've shared nights together, we're all pretty much friends, we call each other, we hang out all the time...it's not like there's any beef or whatever."

Soprano said that type of congeniality wouldn't have flown when he got his start. "If we all DJ'd together, we would all try to show each other up all the time. It was never like, 'Aw, this my boy, we spinnin,' it's like, 'Yeah we cool, but when these turn tables get cut on, and we go to transform this crowd, I'm here to destroy, to demolish you. I want my set to be that good that they won't even remember you.'"

Soprano also said if an STL DJ wins the national in Colorado -- or at the Global Finals in Paris -- it will reaffirm his long-held belief that St. Louis DJs are superior to DJs in other markets because they have to work harder to please a crowd.

"St. Louis is a hard market to DJ in. We don't just go for anything and everything," he says. "If we compare it to Vegas, Vegas might play about 60 more records than we would play here. When a Vegas DJ plays here, it doesn't work. We're just a harder crowd; we're not exposed to as much, and the crowds here are radio-driven. When I go to other cities, I travel DJing for Run DMC, I play way more music."