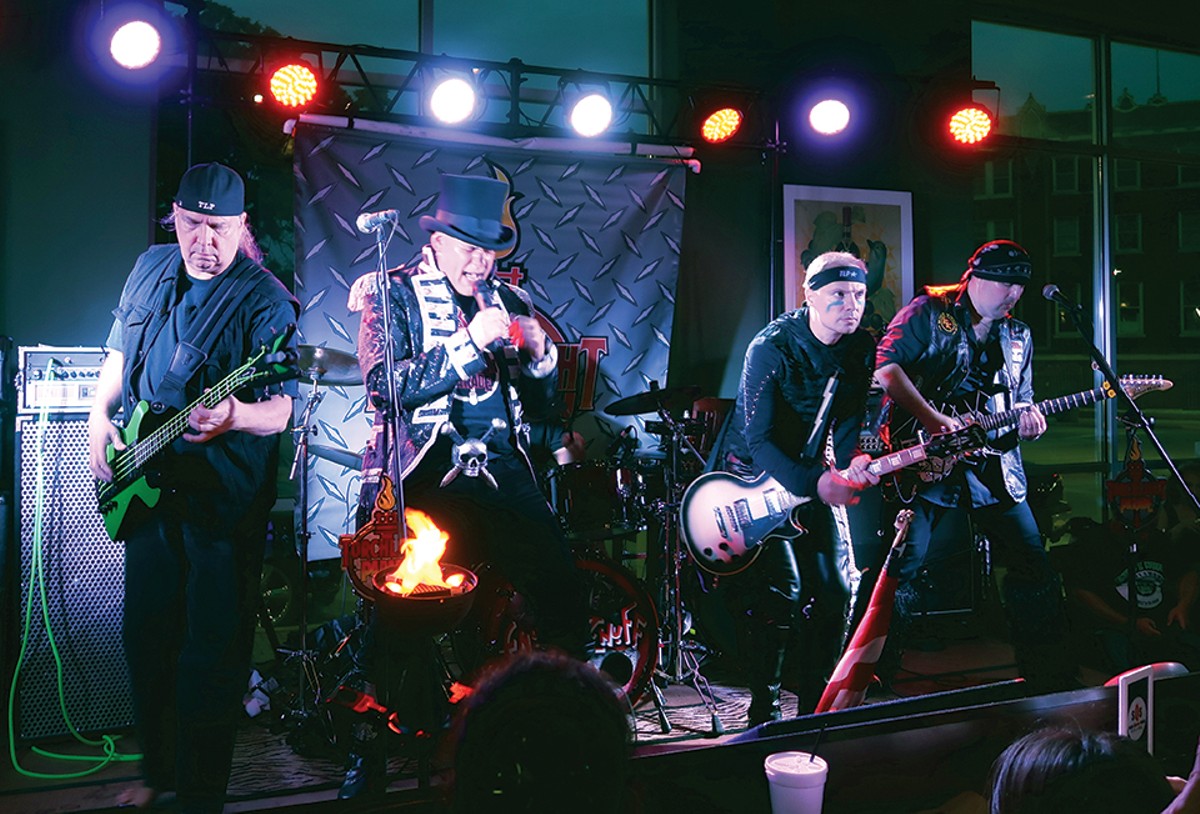 Three of the members of Torchlight Parade work at a funeral home, and they bring that energy to their live shows. ERIN NICHOLS

On Tuesday, August 22, 1989, the self-titled debut album by Enuff Z'Nuff was released by Atco Records, spawning a pair of radio hits in the rocker "New Thing" and the mid-tempo ballad "Fly High Michelle." Those were heady days for the colorfully attired, platinum-coiffed band from Chicagoland. Those two tracks would set in motion a career that would extend for another nineteen albums, the band sticking to a sound that's surfed atop their influences of power-pop, glam, hair metal and crunchy garage rock.

On Tuesday, July 2, 2019, a version of that band, led by salty bassist/songwriter Chip Z'Nuff, would play a headlining show at Lascelles Granite City, a bistro in GC's rebounding downtown. It was the biggest concert in the four-year history of the venue, with about 135 people taking up every chair, table, nook and cranny inside the restaurant, reconfigured for the evening into a rock & roll club, complete with stage, lighting, merch table and a cast of characters.

That batch would include: Johnny Rod, the bass player of '80s metal titans W.A.S.P.; Katy Kruze, a longtime voice on KSHE-95, now involved in some new radio/pod ventures; and in a co-starring role, none other than Stump Stephenson, the catalyst for 1991's Riverport Riot. He prowled through the club doing a little of everything, from securing press seating to handling roadie duties to serving as a kind of hype man for the bands, shaking hands and greeting pretty much everyone in the room. It was a big weekend, and he noted at one point that he "hadn't been home in two days" as he personally marked the 28th anniversary of his famous scuffle with Axl Rose.

While Enuff Z'Nuff was the night's headliner, the band in the middle of the bill, STL's own Torchlight Parade, didn't slouch in bringing out the fans. Their gear was rocked by a number of folks in the audience, their logo prominently mixed into a T-shirt blend that included Anvil, Poison, LA Guns, Armored Saint and, most of all, KISS. The band's an originals-heavy group, with a sound that leans toward the classic metal of Iron Maiden and Judas Priest, Twisted Sister and Quiet Riot. Their stage show doesn't cheat the audience in effort.

By the closer of their set, the bombastic "Red, White and Blue," the band had a confetti cannon shot off on one side of the stage, while a two-man team on the other end of the stage scattered red, white and blue balloons into the air using a modified Ryobi leaf blower. Earlier in the evening, a friend dressed as Michael Meyers of Halloween fame had "killed" rhythm guitarist Danny Nichols in a mid-show slaying and a Bible had burst into flames, while the band's onstage torch burned bright through the entire, nine-song set. Guitar picks, glow sticks and rosaries were tossed into the crowd, sometimes caught, other times bouncing off of hands, tables and heads. For this venue, the group couldn't incorporate props like their full-sized coffin, or human resources like the three bagpipers that have been rehearsing with them of late.

About that coffin: At the core of the band are three funeral home employees, and the group's name "was chosen to invoke an ancient funeral procession."

The band has stayed true to that idea in its staging, songwriting and even names, with the group's vocalist going by Torch (a.k.a. Matt Engel), whose day job is spent as an embalmer. His brother, Doug Engel, is the lead guitarist and the funeral home's hearse driver. The trifecta's completed by original TLP drummer Greg Umfleet, a funeral director at the same facility, which they only name as "one of St. Louis' best-known funeral homes." Guitarist Nichols and bassist Larry Hunter don't share the profession, though Nichols joins the Engel brothers in a bit of rock & roll cosplay, dressed for gigs like a metal ninja while the Brothers Engel channel versions of Jack the Ripper, terrorizing the 1990 Sunset Strip.

Fun is at the core of it all, says Nichols, who claims that "we couldn't fit our whole stage show in here. But the thing is, when it's our turn, it's always like Madison Square Garden for us. It's only rock & roll and it's supposed to be fun." For Enuff Z'Nuff's gig, he apologized more than once for not being able to "run around on stage," due to its being built into a corner of the room normally given over to dining tables. By any measure, it was an unusual gig.

Torchlight Parade has played a few unusual gigs of late, though they make sense in their own way: car shows, bike shows, clubs that cater to a harder rock sound. Mostly, though, the band has carved out a unique place for themselves in the local rock & roll scene, one that the Enuff Z'Nuff gig helped solidify.

"We've gotten our name out to different promoters, and we've been pretty good at selling tickets," Nichols says. "Some like to throw local bands on with touring acts." Those of certain ilk have become the heart of what the band does and where it plays.

In the past year or so, the group has appeared on bills with Stryper, Faster Pussycat, Metal Church and Beasto Blanco, a band closely affiliated with Alice Cooper's camp. On Friday, August 9, Torchlight Parade will appear again with Faster Pussycat, who'll be out on the road with Bang Tango. And, for this one, they promise the full monty, with the return of Meyers plus the coffin, the bagpipes, the confetti, the works.

In addition to the band's originals, the group is able to reach into its personal catalog of favorites, picking covers that make sense to their audience, and those cuts only help in hyping a crowd in advance of a headliner. For the Lascelles show that meant a roughed-up version of CCR's "Fortunate Son," as well as Accept's 1983 metal chestnut "Balls to the Wall." A few fans sang along. They got it — they were in on the fun.

"We've hit on this niche," Nichols says. "We're one of the local metal bands that's become a go-to for these gigs. A lot of these bands are our heroes."

And the members of Torchlight Parade not only get to meet their heroes, they get to share an occasional Marshall stack and a selfie. On an increasing amount of these dream evenings, T-shirts are sold, chicken clubs are eaten, personalized guitar picks are tossed and Stump Stephenson carries away a pedal board.

What's more rock & roll than all that?