Trauma Harness Celebrates a Decade Together With Two New Albums

Swimming in Plastic and Ten Years of Trauma are the latest from one of St. Louis' favorite DIY acts 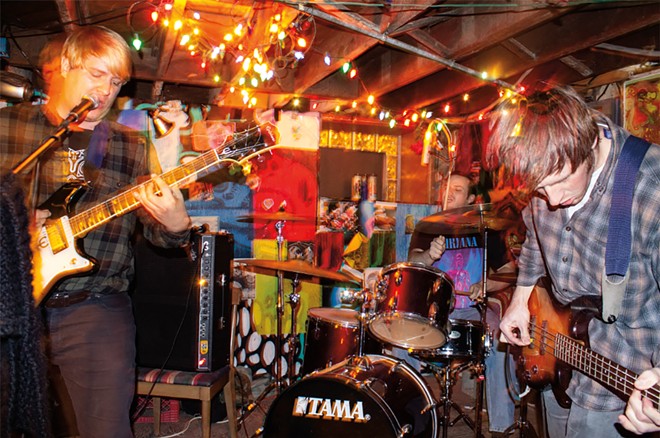 To know the scrappy spirit of the St. Louis DIY scene is to know Trauma Harness. For the past 11 years, the band has pummeled low-ceiling basements and divey bars on either side of the Mississippi River with its passionate explosion of sound. Hammering together a Frankenstein of its favorite genres — rock, pop, electronic and punk — Trauma Harness's music feels in-your-face but sustains sincerity.

Trauma Harness is three friends: Josh Jenkins on vocals, guitar and synth; Andy Peterson on bass; and Johnny Birkner on drums. The trio came together in 2011 after their previous bands broke up.

"I feel like [Trauma Harness] was an opportunity to just be ourselves," Peterson says about starting the band.

The trio began to play and record together at Illegal Tone Recordings, a now-shuttered DIY space in downtown Belleville, Illinois. The bandmates have switched between living in St. Louis and on the Illinois-side over the years. St. Louis is their base, while Belleville is their roots.

Of their collaborative and anything-goes songwriting process, the pandemic forced band members to record online. Jenkins, Peterson and Birkner each added pieces to the recordings like a puzzle, editing and reworking the songs while isolated from each other in lockdown. The outcome is their newest album, Swimming in Plastic, released at the end of July 2022.

The last time Trauma Harness put out a full-length album was in 2020: Invitation of the Death Cult, a 30-song narrative record about a death cult in southern Illinois. Sticking with the concept-album form, Trauma Harness' self-released Swimming in Plastic is set in Carrion Parks, a "place for all malcontent," the liner notes say. The album invites us to enter the theme park through 18 tracks, a wild ride of doomy, goofy sonic creations.

"The theme park as a concept almost doubles like a refuge of escapism," Jenkins explains. Swimming in Plastic fuses the swirling thoughts of the early COVID period. "There's some attitude of existing and finding comfort in an evil world," Jenkins adds.

The physical Swimming in Plastic CD comes with a Carrion Parks Map and lyric sheet in brochure form, designed by Jenkins. The dark blue "oil ocean" universe introduces different attractions, styled almost like levels in a 1990s video game. Each full song on the album correlates with a different neon yet ominous park location on the map key, such as a baseball diamond for "Batter Up!" a water slide for "Tidal Wave," and a burning colorful playspace for "Hellfire," all surrounded by flashes of skulls and radioactive green.

Looking at the park map, Peterson notes: "It kind of depicts this completely hellish world, where people are still having fun, you know? Like they have no choice, really."

Each song is introduced by a robo amusement park intercom narrator, and each captures Trauma Harness's unmissable live aura: poppy upbeat rock with thrashing dark tones. It doesn't take long to pick up on Swimming in Plastic's central themes of cosmic terror, American greed and the police state all acting as pollutants to our lives.

Against this despair, Trauma Harness won't let go of fun-loving songwriting. Each track introduces a toy box of sound distinguishing the different "rides" of the park. Cartoony synths punctuate "Through the Walls," which critiques a country where people beg for medical care. Jenkins often ends the songs of Swimming in Plastic with a lyric of profound uncertainty, a rarity of confessionalism for punk music: "As you fall asleep / you dream of something better / dream of a better place / dream of a better life."

Trauma Harness released another significant album in July around the same time as Swimming in Plastic. Ten Years of Trauma is a celebratory compilation of Trauma Harness's past decade as a band. Curated and put out by Lumpy Records, the 15 pop songs span 10 years of limited online one-offs and songs from small cassette runs, coming together on vinyl for the first time.

The LP, with a standout tomato-red cover of abstract dots and spotlights by artist Eric Mayer, honors the noteworthy continuity of the band, and celebrates an ending. Ten Years of Trauma is the last release of Lumpy Records, a local DIY label that ran for more than a decade. Run by Martin Myer of Lumpy & the Dumpers, Lumpy Records showcased lo-fi punk and post-punk out of St. Louis and beyond, including four Trauma Harness tapes, two LPs, and two 45s. It only made sense to Myer to conclude the Lumpy legacy with Trauma Harness, a band that is symbolic of Myer's own beginnings in the Belleville punk scene in 2007. (Myer has begun a new record label, Rotten Apple, which will focus on multi-genre releases.)

The three-piece went on a short Midwest tour in June with fellow St. Louis synth-punk band the Mall. They also added another local musician to their dynamic, Austin Zink, to sometimes play the synth parts on their electronic-based songs. They've been playing as a four-piece at venues like CBGB and the Sinkhole throughout the late summer and early fall. The bandmates hint that more collaborations and spooky music could be coming in the near future.

Perhaps Trauma Harness's longevity attests to its ability to morph and adapt. For a DIY band, especially in St. Louis, staying together for over a decade feels rare.

"I feel like our friendship kind of keeps the band alive," Jenkins says.

And the group doesn't show any signs of slowing down.

"We always made the joke that we can see ourselves being a band when we are like 70 years old or something, who knows," says Birkner. "Time is strange." 

Delia Rainey is a musician and nonfiction writer from St. Louis, Missouri. She has been involved in the St. Louis music scene with her band Dubb Nubb for over 12 years. Her recent writing has been featured in Post-Trash, new sinews, DIAGRAM, and elsewhere. Find out more on Twitter (@hellodeliaaaaa) and deliarainey.com...
Read More about Delia Rainey
Scroll to read more Music News & Interviews articles (1)