Twenty Years After His Death, Eazy-E Deserves a Spot on Rap's Mount Rushmore 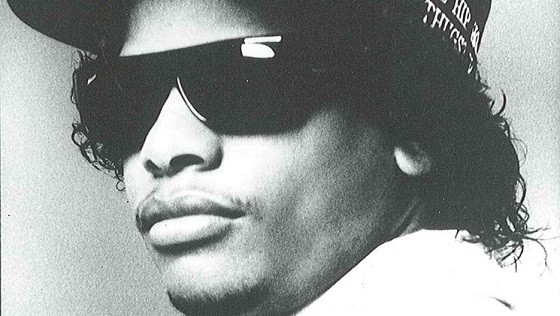 For Eazy-E, the concept of gangster rap was fully formed in his mind.

By 1986 the genre, which nobody then called "gangster rap" ("reality rap," please) had begun to sprout in LA by way of Ice-T's "6 'n the Mornin'," which was patterned after Philadelphia rapper Schoolly D's "P.S.K. What Does It Mean?" But there was no gangster-rap label, and certainly no gangster-rap genre.

Eazy-E was an unlikely progenitor. "I didn't know he rapped," remembers MC Ren, his future bandmate in N.W.A. "Ain't nobody know."

Ren grew up in Compton two blocks from the diminutive, quiet Eric Wright, who made his name in the neighborhood selling crack. But Wright grew apprehensive about the lifestyle and sought to parlay his earnings into a rap business. His first single, "Boyz-n-the-Hood," caught fire in the streets, helping build his fledgling imprint, Ruthless Records.

"He was the only person I knew who had his own record on his own label," Ren says. "He didn't have no offices or no shit like that. It was just the idea that he had a record."

"He was a visionary," says Phyllis Pollack, who later became Eazy's publicist. "He came up with ideas for things that later happened." N.W.A's success begat Ice Cube and Dr. Dre's solo success, and Dre begat Eminem, 50 Cent, the Game and, to some extent, Kendrick Lamar. Even Tupac and Biggie owe Eazy a debt; their labels, Death Row and Bad Boy, followed in Ruthless' wake.

But today, twenty years after his death, Eazy isn't venerated the way many of those artists are. Even with the N.W.A biopic on the horizon, he's remembered by some as a footnote, rather than a hip-hop colossus who changed everything. With Tupac and Biggie's faces chiseled onto rap's Mount Rushmore and the likes of Jay-Z, Nas, André 3000 and Eminem duking it out for the other spots, Eazy's not even in the conversation.

But he should be. In fact, he deserves to be on the mountain.

To be clear, Eazy was far from a technically great rapper. He famously took forever to record "Boyz-n-the-Hood" because of his poor flow. "I ain't never see nobody take that many takes," Ren says. And he usually didn't write his own verses. People such as Ice Cube, Ren, the D.O.C. and Dr. Dre often did that for him.

But Eazy's high-pitched voice -- alternately hilarious and terrifying -- stands up well on record. More importantly, he had the gangster vision that ultimately took over hip-hop and remains its driving force today.

Eazy handpicked once-in-a-lifetime talents Dre and Cube for N.W.A, and they would reap much of the glory for their production and lyrics, respectively. But their inspiration, by all accounts, was Eazy's life and times.

"Seventy-five percent of the lyrics and content you hear in N.W.A was going on in Compton and was lived by my father," says Eazy's firstborn son, a rapper himself who goes by the name Lil Eazy-E. "All we're doing, we're plugging into Eric's life," said Dr. Dre, according to N.W.A manager Jerry Heller's memoir, Ruthless.

Eazy wanted to express what was really happening on the streets of late-'80s Los Angeles, then in the throes of the crack epidemic, gang violence and police chief Daryl Gates' assault on its poorest citizens.

"We're telling the real story of what it's like living in places like Compton," Eazy told the Los Angeles Times in 1989. "We're giving them reality. We're like reporters. We give them the truth. People where we come from hear so many lies that the truth stands out like a sore thumb."

The media often were dismissive of N.W.A during its time. Straight Outta Compton "is well-known for an obscene anti-police number," the Times wrote glibly in 1992. The song in question was, of course, "Fuck tha Police," which predated Rodney King, Michael Brown and the entire #blacklivesmatter debate. It's now considered the greatest protest song in rap history.

Ben Westhoff is the author of the books Original Gangstas, Fentanyl, Inc., and Little Brother: Love, Tragedy, and My Search For the Truth.
Read More about Ben Westhoff
Scroll to read more Music News & Interviews articles (1)