Getting your celebrity gossip from TMZ is soooooo 2009, dude. Each Thursday in "Twitter Litter," RFT Music rounds up the week's best meltdowns, ego battles and WTFness from rockers, rappers and DJs who aren't afraid of a little hashtag action. It's time to take out the trash.

Remember a few weeks ago when we told you that the only thing Ke$ha (@keshasuxx) wants for Halloween is a vagina haunting? MTV has posted a step-by-step guide on how to make it happen, and our girl is all over it:

Great, but what will Ke$ha, herself, dress as for Halloween?

me + @kamase11 in just about the least sexy Halloween costumes one could find http://t.co/sqhogz7fXd

That "Rawwwwrrr" needs a bit more work, Ke$ha. Points for listening to "Under Pressure," though. 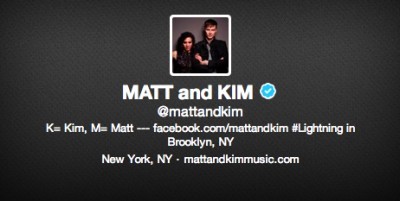 Uh oh. What ridiculous suggestions will the interwebz overlords give them?

Might get kim too hot and heavy... RT @thewhitepanda: @mattandkim cover yourself in various grey paints. 50 shades of grey.

When Queen Latifah (@iamqueenlatifah) dresses for Halloween, she retains her royalty by becoming Oprah Winfrey. OPEN YOUR BOXXXXXEEEEESSSSSS!

The #QLShow "Halloween Fit for a Queen" celebration had to include the "Queen of Talk" @Oprah! Here's a sneak peek http://t.co/NtYutbmUHV!

We haven't watched the episode yet, but ten bucks says Cover Girl Lash Fanatic mascara is in those boxes. NO CARS FOR YOU!