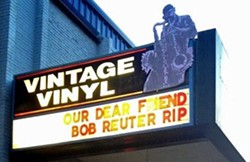 UPDATE: More details have been announced regarding Bob Reuter's memorial. The service will run from 7 p.m. to midnight, and will be a "multi-media production that will celebrate Bob's music, photography, writings, stories, and drawings." Bob's band, Alley Ghost, will perform with several guest singers and musicians from Reuter's previous bands, Kamikaze Cowboy, Thee Dirty South, and more. His photographs will line the walls on display, and his poetry and writings will be read aloud by friends and colleagues.

From the press release:

Proceeds will go toward the preservation and exposure of Bob's art, as well as the Cowboy Angel Foundation, a new organization being formed to honor Bob and to help disadvantaged artists.

For more information, go to cowboyangel.org.

It's official. Friends and fans of Bob Reuter will gather next month to commemorate the life and work of the St. Louis artist and musician who died Saturday in an elevator accident.

In a Facebook message today, Reuter's Alley Ghost band mate Chris Baricevic wrote of the event: "Rest assured that it will be a celebration of all the various forms of Bob's art."

In the days following Reuter's death, Baricevic has attempted to clear up misinformation on social media about a memorial, with some media reporting that the official remembrance is to take place this Saturday. "[P]lease realize that there WILL be an official, sanctioned memorial and it WILL involve the community," wrote Baricevic in another Facebook posting this week.

RFT Music has a message out to Baricevic, executor of Reuter's estate, for additional details about the September 8 event. More information when we get it. In the meantime, here are a few links to our additional coverage of Reuter's life ... and death.

Note: This article initially had an incorrect start time for the September 8 tribute. Its hours of operation have yet to be determined.