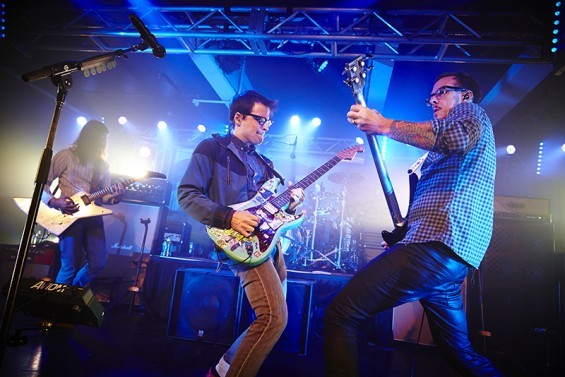 Ok, so maybe when it comes to music, length really doesn't matter.

In stark contrast to Pearl Jam's recent three-hour show, Weezer sprinted through its headlining set at Plush in just over an hour. Then again, perhaps this was appropriate, with the band's performance being the grace note of the Rock 'n' Roll Marathon on October 19, 2014, though lead vocalist/guitarist Rivers Cuomo readily admits to failing P.E.

"I was never much of a runner... but for some reason, you picked Weeeeeeee-zer," Cuomo sang during an instrumental interlude. "You're not asking us to run or do calisthenics or push-ups or anything but play muuuuuuu-sic. That's what we dooooooo. That's all we dooooooooooooooo."

Athletic or not, Cuomo and friends performed a tight, hit-laden set and became more animated and enthusiastic as the show went on, but intrigue began even before Weezer played a single note. As the band's crew set up instruments and equipment, Cuomo and two team members taped about ten sheets of paper near the singer's spot on the stage floor. Bands often post setlists to guide their shows, but we've confirmed that last night's sheets actually contained lyrics to songs from Weezer's newest album Everything Will Be Alright in the End (released October 7), including the tune "The British Are Coming." Cuomo also sat on the floor and wrote notes with a Sharpie.

This precluded what ultimately felt like an intimate performance. In the low-capacity confines of Plush, Weezer seemed like just another band as group members tuned their own instruments and casually walked around the stage. Don't mistake that notion as a gripe; Weezer is big business. But with many of its shows over the years also employing some level of spectacle or conceit, last night's "Celebrities: They're just like us!" feeling was refreshing.

When the show finally did start, Weezer kicked things off with Everything's "Ain't Got Nobody," a throwback to the group's poppy alt-rock style of the '90s. One of the classic elements of a Weezer song is three-part harmony, and Cuomo, guitarist Brian Bell and bassist Scott Shriner complied beautifully during the tune's bridge. The band seemed a bit bored or tired, though, perhaps failing to eat the energy bars that the Rock 'n' Roll Marathon supplies to runners.

Next, Weezer went into "Hash Pipe" from 2001's Weezer ("the Green Album"). The song sounded pleasantly grimier than usual, with a bit more amped-up bass. As band leader since 1992, Cuomo proved throughout the night that his voice was nearly as strong as ever, only becoming raspy periodically during the verses to this song (yet surprisingly keeping the falsetto intact here and elsewhere).

On page two, see more photos, plus the setlist!