For the low price of just $600 you, too, can style yourself like the Spaceman 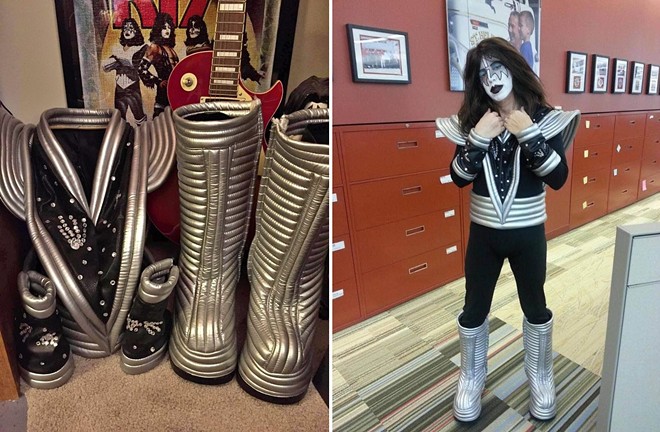 Red alert for all Kiss Army soldiers and wannabe Spacemen: A local Kiss fanatic based in Weldon Springs is unloading his entire collection on Facebook Marketplace, including a pretty bitchin' custom-made Kiss costume.

The seller, Kerry O'Brien of Mr. Make-Believe Kiss Kollectibles, says he's been collecting Kiss merchandise for 45 years, amassing so much stuff that he can't even fit it all in his house and has to keep it in storage. The obsession, he says, started when he was just a boy.

"I've been a Kiss fan since I was seven years old," O'Brien tells the RFT. "My first album was Destroyer. I got it from my seventh birthday. And ever since then I've just been a huge fan."

Now 53, O'Brien has decided it's time to get his goods into the hands of other Kiss aficionados.

With more than 60 listings on Facebook Marketplace, there's surely something to pique the interest of any fan of the storied rock band. In addition to the costume, O'Brien's collection includes such goodies as a replica copy of Paul Stanley's purple cracked mirror Ibanez guitar; a pair of fingerless gloves with the words "KISS ARMY" on the knuckles; gold-foil artwork from the band's Psycho Circus album; a Cat-Man hoodie; and a pair of Gene Simmons dragon slippers.

As for the pièce de résistance, a bespoke costume based on Ace Frehley's Destroyer/Psycho Circus look, O'Brien says he bought it years ago from a seller on eBay before altering it to better fit his frame. He's selling it for for $600; if purchased new, he says, it would cost a "couple grand, easy." According to the listing it'd be best suited for someone with a small to medium build — O'Brien says he is five foot six and weighs less than 150 pounds.

If you, too, fit that bill, O'Brien wagers that the badass 'fit would pay for itself in no time.

"Anybody that did buy it, if they were in a costume contest, you know, depending on what the money was, they can earn that money back real quick," he says.

Check out the full collection here.