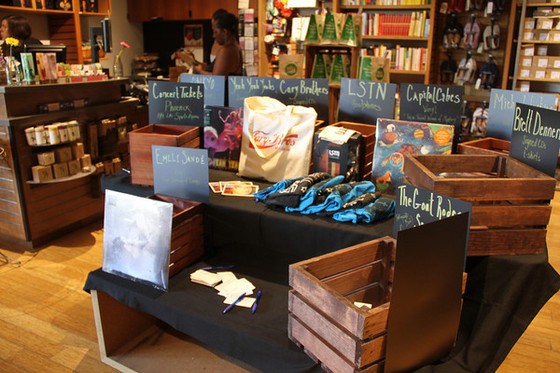 Whole Foods stores on the West Coast are in the midst of a strange transition to vinyl retailers, making one wonder if this is the start of a national trend. This story originally appeared on LA Weekly's music blog, West Coast Sound.

"Pile on that kale salad," sings Taylor Goldsmith of Dawes from the Whole Foods parking lot. The ad-libbed riff on his song "It's A Little Bit of Everything" draws a mannered whoop from the weekend afternoon crowd, who have come to politely welcome Whole Foods into the music curation business.

Indeed, over the weekend the grocery store chain debuted vinyl-heavy music dispensaries in five of its 340 stores, including one in West Hollywood. The event is swarmed. Valets scurry to park cars while those in attendance slurp oysters and crunch gluten-free pita chips. Two Mercedes get into a honking match and the sound-guy shouts: "Shit just got real in the Whole Foods parking lot." Soon, many in attendance go inside and dutifully buy Arcade Fire records. Such is the state of the industry in 2013, where folks are increasingly less likely to buy music at an actual music store.

Whole Foods has good reason to get into the music game: Starbucks, of course, has been selling music for white people and those who love them for years. And concerning vinyl, 2012 saw a 19% upswing in wax sales, a trend that has been consistent for the last half decade. Urban Outfitters, a master of disseminating and commodifying alternative culture, has had success with vinyl as well.

See also: Is It OK to Buy Records at Urban Outfitters?

Still, Whole Foods knows that even if they corner a significant portion of the market, the revenue would be relatively paltry. (Their sales, after all, were $11.7 billion last year.)

So why bother? One suspects suspect the real motivation behind this move is to further cultivate a sophisticated bohemian image. They are in the "culture business" -- if Urban Outfitters is the Best Coast of retail music crossovers, Whole Foods wants to be the Mumford and Sons. The hipsters are going to mature into middle age and some of them are going to find high paying jobs. It's telling that the first five Whole Foods locations to sell music -- West Hollywood, Fairfax, Arroyo, Santa Barbara, and Venice -- all have one foot on either side of the hip/affluent line. Be cool; spend money.

And let's not forget the baby boomers, who may not represent the future but definitely have the money part. Why else would Whole Foods be selling Eric Clapton?

Beyond that, their selection is an, um, mixed bag. They've got about 150 different records available, including those from Daft Punk, CCR, Paramore, Bob Marley, Tegan and Sara, and a handful of Pitchfork's best new music picks. Hip-hop is notably underrepresented, as is any kind of metal. (Surprise!) Jason Isbell is hiding out among the hordes of indie rock.