With Fragile Porcelain Mice and Many Other Gigs, Jake Brookman Is St. Louis' Go-To Cellist 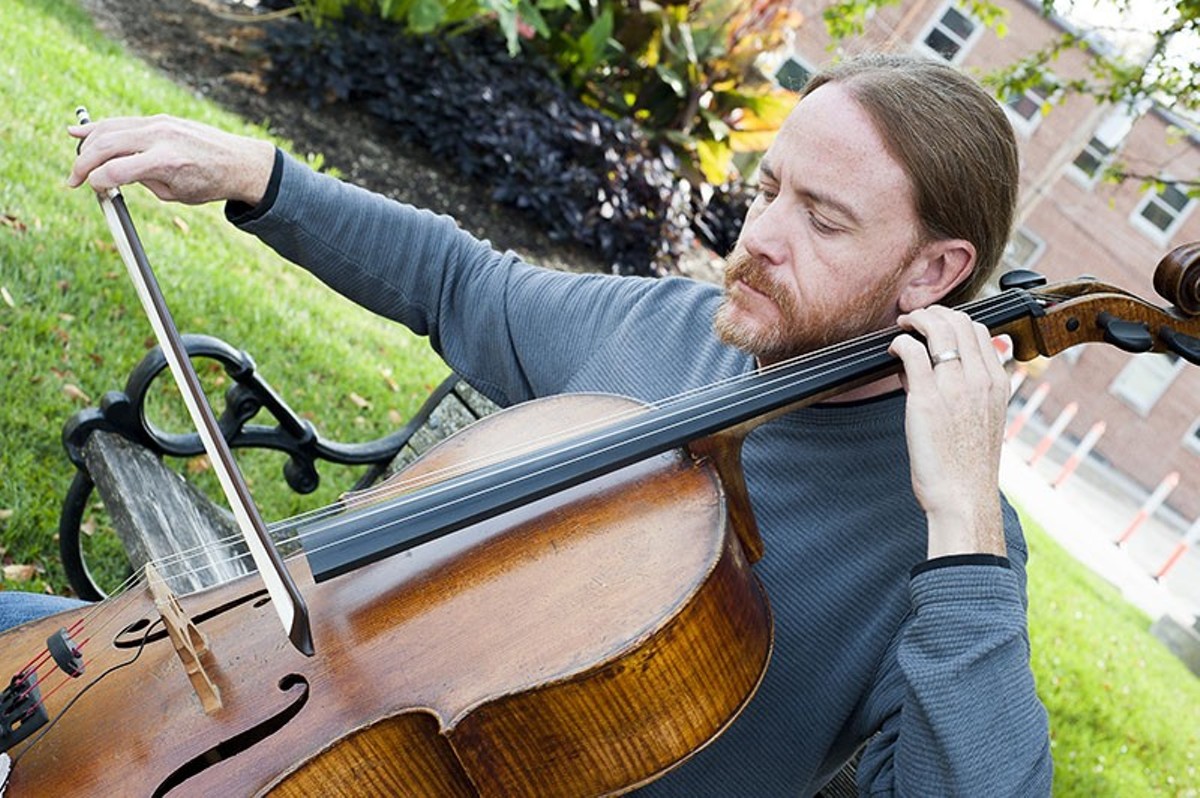 “Music does something for me that other things can’t," says Jake Brookman. PHOTO BY KELLY GLUECK

On the night before Thanksgiving, Fragile Porcelain Mice will play at its frequent reunion venue, Pop's. It'll be dark and loud and rowdy, and in the middle of the madness will be one of the nicest folks to call St. Louis home, cellist Jake Brookman. He'll join the band for a trio of songs, a bemused half-smile on his face, even as his instrument adds a sinister edge to each cut.

Less than a month before, on October 29, Brookman played a set of cover material with his folk act of the last decade or so, Salt of the Earth, creating a new digital album in front of a live audience. And there's a very good chance that at some point between, he'll be playing weddings or other genteel settings with pianist Dave Becherer, showing off his confidence and comfort with the classical repertoire.

"I've never felt competitive," Brookman says. "There are other musicians, of course, who are scrambling and looking for things. I'm more laissez-faire. I let opportunities come to me — and a lot of things have come to me. I've been very fortunate. I have a knack for saying 'yes,' and I'll play anything once. I'll give anything a shot to see what happens. Sometimes you can find real magic that way."

Whether live or in a studio setting, Brookman is frequently a first-call cellist for a wide variety of acts in town. His music has developed into a career that balances nicely with his day job as assistant ticket manager at the Touhill Performing Arts Center. He figures that he plays roughly twenty days out of the month, be those rehearsal, recording or live dates.

It doesn't seem like that, though, as bands continue to bring him in for gigs — including the Trans-Siberian Orchestra, El Monstero, Celebration Day — and he gets hired by old buddies like fellow Suede Chain alum Brian Krumm, with whom he'll play at Stagger Inn on Thanksgiving itself. "Serving the music" in all of those settings, he says, is the goal.

Brookman's start came at a young age and an unlikely location: the Olive Garden. Each of the four high-school musicians enlisted to play got $50 and a meal — until the gig was cancelled when the manager of another location objected to the concept.

"We got fired," Brookman figures, "because we were too cool."

What's even cooler is the catalyst that shifted him from a talented teen player into someone with legitimate ambitions. After seeing Yo-Yo Ma at Powell Hall, Brookman wound up backstage with the legendary musician, who he credits as a deep influence. Brookman asked if he could play the master's cello. He agreed and said he enjoyed Brookman's playing, encouraging the young man to perfect his craft. Soon, Brookman would try out for (and be accepted by) three top music programs.

Unlike a lot of young players who leave college and join unsuccessful basement projects, Brookman joined a band with Collinsville roots who'd come together as collegians in Champaign, Illinois. Adding a string section, originally for a single event and then for good, the Suede Chain became a top indie-rock draw in both St. Louis and Chicago, and they began pushing outward from there.

"We did go full force in trying to make it," Brookman remembers. "We went out on tours for six weeks, bought a van and trailer. The full monty. Suede Chain was my first rock band, and I'm completely not embarrassed by it."

"I knew Jake casually from St. Louis Symphony Youth Orchestra," she recalls. "We were both members in high school. I was an average violinist and he was one of the star cellists. At that time, he didn't quite strike me as the badass I met later when I began playing with Suede Chain. From the very first rehearsal for 'Rust,' the performance art piece that brought strings to the band, Jake had an insatiable appetite for music. He would play any time, pretty much under any circumstances. He always wanted to be playing, and he wasn't shy about asking — or joining in even if he hadn't been asked. Even if he wasn't playing, he always wanted to be surrounded by music."

"Music does something for me that other things can't," Brookman agrees. "The way it makes me feel is indescribable. Growing up I played chamber music, orchestra and opera music. The standard things a classical cellist would play. Then, when I came back from school, the Suede Chain asked me to play with them. Growing up, I was listening to everything from the Kingston Trio to Tom Lehrer and Gilbert & Sullivan. Just all over the board. I went through different phases: pop, heavy metal, rap. Ministry. Public Enemy."

Weingartner says, "Suede Chain seemed like it was probably a welcome addition to Jake's musical and behavioral repertoire — a departure from the stuffier world of classical music."

While playing with the Suede Chain, Brookman worked at Streetside's linchpin Delmar location, gigging with everyone he could. When Suede Chain's time finished, he landed gigs with Vitamen A and Fragile Porcelain Mice. His day jobs began to get more serious, too, and the frequency of out-of-town touring waned somewhat. Still, he had plenty of gigs in town and more than enough opportunities to showcase.

"Jake was, and still is, a 24/7 performer," Weingartner says. "He'll put on a show from sound check — used to always be Kashmir and/or Pachelbel's Canon; when Game of Thrones became everyone's obsession, I feel confident Jake began sound checking to its theme song — to the last note of an encore. In any performance, live or in studio, he'll hold a final note the longest, always demonstrating that he has more musical stamina than anyone else on stage.

"I remember one of the first times Radiohead played St. Louis," she adds. "They were playing a smallish venue and Jake had decided he really wanted to sit in. He showed up with his cello, got himself tuned up, and stood at the base of the stage, cello in hand, trying to convince them to let him join them for a song or two. He was pretty insistent but ultimately unsuccessful. Still, I was in awe of the fact that he had the balls to ask and make such an effort."

There is effort in Brookman's world, sure. And inspiration. And happenstance. And...

"Everybody has their own path and course in life," he says. "Some people do accounting; that's what they enjoy. I've always thought that music is something good for everyone to at least try. It's physical, it's cerebral, it's a foreign language, it's math, it's physics. Everything's involved in playing an instrument, a hodge-podge of different disciplines. It's part scientific, part art. I straddle that fence a lot in my life, thinking about how and why they work."