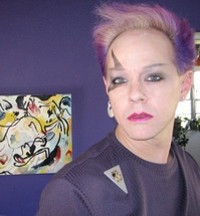 Courtesy of the artist

It would take something major to slow down the ultra-prolific Tory Z Starbuck or his band, the aptly titled Tory Z Starbuck Project. Pregnancy qualifies. Starbuck and his wife/bandmate Venus Slick are expecting their first child next January and consequently are not planning any Project concerts after this Sunday's 3 p.m. performance at Vintage Vinyl. "After January 9, which is the due date, I'm thinking I'm going to be busy," Starbuck says. "Also, I don't think we're going to be able to rehearse at night. Things are just going to change."

Change is somewhat normal for Tory Z Starbuck Project, which cycles through different musical styles, instrumentation and sometimes even band members from album to album. The group's discography runs the gamut from otherworldly space jazz/funk to middle-eastern psychedelica to chilling darkwave and more. The one constant is that albums come out fast -- Starbuck has released nearly 30 full-lengths since he started making albums under his name in 1996 (this doesn't include his prior work with groups like Next Radio, Ultraviolet Renaissance, Futurist Manifesto and Saturnalia Glossolalia).

Although he acknowledges that he won't maintain this pace for the time being, Starbuck is hardly done making music. For one, he will still fill his sideman/collaborative roles in Pat Sajak Assassins side-project Key Grip and the mostly instrumental Ethnic Muzik for Non-Existent Countries. Starbuck also says that he has around twenty albums worth unfinished material that he would like to complete. "I add a little bit to it every now and then," he says of a recent unfinished work that featured Ra Cailum's Anthony Engelhardt on guitar. "We still work on it, but very leisurely." In addition, Tory Z Starbuck Project has some albums that only need mastering and artwork.

Sunday will, however, be the last time you can experience any released Tory Z Starbuck Project songs live, at least for a while. Because of this, the band will be playing a career spanning set that will also include improvisation, material from Next Radio and a Walker Brothers cover. "If I had a bigger audience I could just really say this was my greatest hits show," Starbuck jokes. "It's a show that I think when people leave they kind of get an idea of what we do."