Lollapalooza, Day One: The Rest of the Fest

(Click on any photo for a bigger image. Photos by Will Jones.)

After driving up from St. Louis the day before (musical choices in the car: R.E.M. Reckoning and Murmur, Wilco's Summerteeth), I managed to sleep entirely late and miss the very first acts of the day. No matter! I knew I needed to conserve my energy for the Daft Punk extravangaza happening later that night. So I headed to a shady bench near one of the stages and parked myself for the afternoon.

This was a fabulous vantage point, as I was next to the stage with some of the more interesting acts going on that day, including:

Viva Voce: This Portland co-ed drum-guitar duo did a fine job opening for the Shins this winter, and its set at Lollapalooza also didn't disappoint. While marred at first by some sound fuzzies -- the guitar kept distorting during the set, very distracting -- the group hit its groove about halfway into the 45-minute set. That's when the husband-wife team found the groove within songs from 2006's Get Yr Blood Sucked Out. Buoyed by a distorto-psych-blues grimy core, Anita Robinson's voice emerged as a cross between PJ Harvey and Elizabeth Elmore (Sarge/Reputation fame) -- and she was as much a shredding guitar god as any icon -- while husband Kevin drummed and played acoustic guitar where needed. Much, much more interesting and authentic than kindred spirits the Kills (and the person next to me compared 'em to Local H. Go figure.) 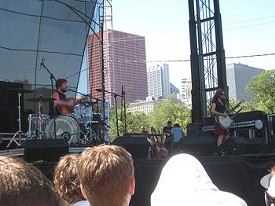 (Aside: So, the best thing about the festival was being able to listen to other acts playing -- without having to go fight crowds to see them. Hence, I listened to Ted Leo and Jack's Mannequin while reading on the bench and waiting for other bands. The latter especially sounded great, all exuberant piano-pop and boyish charm; the former I saw again, so will mention separately.)

Against Me!: Everyone's favorite sell-out punks Against Me! -- the group who famously filmed a DVD about themselves stringing along major labels, and then promptly turned around and signed with one. (Seriously, though, the band has had non-punk influences and non-militant political stances -- or, rather, conflicting personal politics -- for years now.) Label status or not, the fierce Gainesville band began the set sounding like bleeding-heart politicos Midnight Oil (with a bit of the Call mixed in); things looked promising. Tom Gabel's muscular voice is bizarrely reminiscent of Ian Astbury of the Cult at times, although his wiry, tattooed body isn't; the way he plays guitar like a jackhammer is a sight to behold, while the rest of the band runs around stage with equal vigor. An early appearance from "From Her Lips to God's Ears (the Energizer)" (the song mentioning Condoleeza Rice by name) was fantastic and energizing -- heck, the group played a song outro that threatened to turn into Metallica.

But when the band started to play cuts from latest album New Wave, things turned...boring. Perhaps because the songs themselves are lame lyrically -- as I said elsewhere in a review, they ask more questions than assert answers -- or because the music is too slick and rather generic, Against Me!'s pounding shtick grew tiresome very quickly, and the last half-hour of the set was interminable. Even the dance-punk "Stop" didn't do much for me. I rather felt like the toddler in front of me who fell asleep in her mom's arms.

Silversun Pickups: The band I was waiting to see, who played one of my favorite concerts this year so far in town. What stood out the most as the quartet played to a huge, huge crowd was just how happy it seemed to be there. Seriously, the smiles on the band members' faces lit up the entire area and warmed my heart. 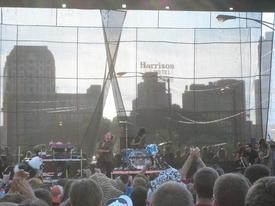 Despite some rather serious (and annoying) sound problems -- vocalist Brian Aubert's guitar was pretty much inaudible for the first few songs, a shame since it opened with the distortion dust-cloud "Well Thought Out Twinkles" -- the band overcame these and, like Viva Voce, hit its stride about midway through the set. "Kissing Families" and, of course, the raw-throated, abstractly romantic hit "Lazy Eye," were the highlights; and to those who hear a ton of Smashing Pumpkins in SSPU's sound, well -- the hurricane of reverb it unleashed was way more My Bloody Valentine, and a few chord progressions were very U2.

Aubert's stage banter was hilarious as usual; one song was dedicated to "the chicken," referring to some dude who inexplicably was hoisting a pinata aloft during the set. He and bassist Nikki Moninger also had cute banter about dedicating a song to the "back of the crowd"; Nikki acted fake-confused and kept dedicating the song to the front of the crowd,causing Aubert to exclaim, "Well, there goes the record sales." 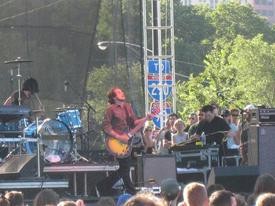 But the best part about SSPU -- and a part that came through live too at Lollapalooza -- was that the band's music makes you feel hopeful, makes you feel possibility and that the future is wide open. It's a sentiment reflected in Aubert's howling, guttural cry of "It's revolution, baby!" during "Future Foe Scenarios." Indeed.

Blonde Redhead: As I moseyed over to get some food and then a prime spot for, er, Satellite Party, I caught a bit of Blonde Redhead. 23 is one of my favorite records of the year, the best bit of shoegazery dream-pop I've heard in a long time, but I was not impressed by the set. While the sound was good -- crystal clear and haunting -- the dynamics and shimmering mystery of the record were absent, replaced by extended wankery and jams that lacked dynamics or interesting diversions. Yes, I know this harkens back to old-school Blonde Redhead, so perhaps this is a reflection of me preferring newer stuff.

Satellite Party: Perry Farrell's new outfit. One would be hard-pressed to think it's a new band, though, since four Jane's Addiction songs ("Stop," "Mountain Song," "Been Caught Stealing," "Jane Says") and a Porno for Pyros chestnut ("Pets," natch) appeared. Furthermore, Farrell likes to choose bandmates that resemble old bandmates -- especially guitarists; his new one sonically is a dead-ringer for Dave Navarro, all bursting with LA glam-boogie-funk. (Incidentally, one of the new SP songs played could have fit on RHCP's One Hot Minute -- the album on which Dave Navarro played.) The old stuff sounded way better than it should have, with the lithe Farrell dressed in white pants and a turquoise shirt (the very color of the swimsuit his wife wore -- she was in the band, and honestly was super annoying, since all she did was dance around like a Price is Right spokesmodel and shake a tambourine. So basically she added nothing to the set.) The new SP songs, in contrast -- which had hints of reggae, funk and good-ol' rap-rock -- were pretty terrible, lacking life and originality; even the Britpoppy single "Wish Upon a Dogstar" seemed anemic. Farrell's voice cracked on the new songs, but sounded great on the old stuff; go figure.

Starting a trend he would continue for the rest of the weekend, Farrell started talking during his set -- and didn't stop. Sounding like a cross between Mango from SNL and a loopy fairy, he showered the crowd with nicknames ("My lovelies" and "my pets") and bantered with aplomb. A typical conversation went like this: 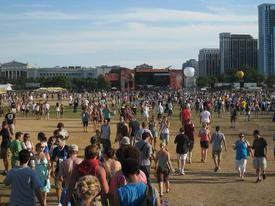 Perry: "What's in my mug, Carl?" (to a bandmate) ::random murmurings and conversation:: Carl: "Jagermeister." Perry: "You weren't supposed to say! And I meant musically!"

By the end of the fest, Farrell felt like that relative who won't leave at holidays, who keeps asking for "one more drink" and doesn't realize that he's overstayed his welcome. He popped up onstage to introduce bands and even went on the kids' stage and did..."Stop."

LCD Soundsystem: The brilliant schedulers set LCD Soundsystem up at a stage right across the field from Daft Punk, just before its set. "So, uh, this song is about a band that's playing over there. That's funny. But not ironic. Um..." And then James Murphy launched into "Daft Punk is Playing At My House," one of the singles that jumpstarted the career of LCD Soundsystem. Murphy is a notorious perfectionist -- he even adjusted gear when he went onstage -- but also looks like a fun dude to hang out with at a party, since his jeans-and-T-shirt outfit and unshaven face looked like he had just rolled out of bed to play.

That casual demeanor didn't translate to a lazy set, however: His five-piece band was incredibly tight, jamming out like a fantastic house band for a disco-punk revue, and Murphy's spastic soul-yowls and percussion interludes were livewire. The set built in intensity, emotion and energy, too, with New Order emerging as the main influence. And incidentally, a jagged, screaming "North American Scum" came early in the set, and its sentiments were rather hilarious and ironic -- especially when sang to a bunch of dirty audience members and a lawn full of litter courtesy of said audience.