Last night’s Rocky Votolato show at Off Broadway made me homesick. Like a true Seattleite, the bearded Votolato was hunched over a MacBook Pro before he went on stage, updating his tour diary blog.

Tech geekery aside, the entire affair smacked of the Emerald City. The crowd was predominantly twentysomethings clad in vintage plaid, hoodies and Voxtrot T-shirts. Off Broadway’s much-welcomed non-smoking policy (a Washington state law) caused a hooded herd of smokers to dutifully huddle outside in a drizzle. The only thing missing was a piping hot cup of fair trade java in Votolato’s hand.

(Instead, Votolato, perhaps in a nod to St. Louis’ inexplicable ale allegiance, was sipping a bottle of Bud throughout the evening. Had the opportunity arisen, I would have introduced him to Schlafly Coffee Stout, the deliciously caffeinated brew that needs to find its way to Seattle’s coffee-crazed shelves immediately, because right now there’s nothing like it. But I digress.) 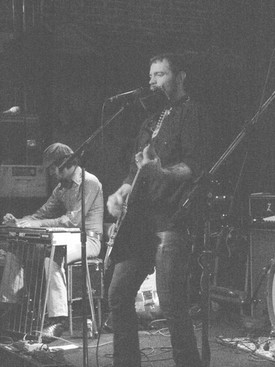 Seattleite though he might be, Votolato is at his best when he unleashes his raspy voice and embraces hints of Southern rock. A pedal steel added twang to several songs, particularly re-charged versions of “White Daisy Passing,” Votolato’s best song, and “Portland is Leaving.” The best example of the geographically dexterous sound, however, was a knock-out cover of “The Night They Drove Old Dixie Down,” which took a page from the greatest North-by-South sounding group of all-time, The Band.

On songs such as“Wrong Side of Reno,” and “Postcard from Kentucky,” Votolato slipped into a standard Dylan-in-´68 singer/songwriter with electric guitar and a harmonica bit, an act that didn’t hold up nearly as well as his gritty, down-low Southern ballads.

The ship was righted, however, when he sent his three-piece backing band packing so he could, “do a couple of quiet ones by myself.” Here Votolato stuck with the electric guitar and deftly finger-picked and crooned his way through songs like “Montana,” and “Mix Tapes/Cell Mates,” from his recently released album The Brag and Cuss.

In the end, however, the most striking part of the show was the audience’s enthusiasm. At one point, when Votolato was solo onstage, a fan set a shot of Jack Daniels at his feet, explaining to his friends, “It’s his favorite.” Though the venue was nowhere near capacity, it seemed as though virtually everyone walked away with a T-shirt or vinyl LP from the merch booth, manned at one-point by Votolato himself. And when he posted up to the bar after exiting the stage, he was mobbed.

Votolato, no doubt accustomed to too-cool Pacific Northwest detachment, was wowed. “I’m always excited about coming here,” he said. “I’ve been looking forward to it for a few days.”