Last night's Lil Wayne concert at the new Chaifetz Arena included a slew of surprise guests, including Nelly and Birdman, but ultimately it was Weezy's night.

The show, which was announced a little more than two weeks ago, brought in concert-goers who filled the lower portion of the 10,000-seat arena. (The top bowl was nearly empty; not sure if tickets were being sold for that section.) 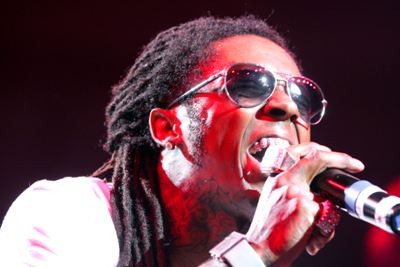 At 11:22 p.m., the 25-year-old New Orleans rapper hit the stage and stood at a mic stand, in full-on rock star mode. Wayne's stage set-up was "in the round" -- which brings the performer closer to the audience -- and, as expected, a mass of people pushed their way toward the front. When he walked up the steps to the stage, women went ballistic, men strained for a look and many lit up blunts they had anxiously been keeping just for the set.

Here's the set list -- but because the show was a fluid mix of songs and pauses, and alternating call-and-response lines, chime in with any corrections.

"Money on My Mind" "Duffle Bag Boy" "The Block is Hot" "Burn This City" "Comfortable" "Started Out Hustlin'" "Ms. Officer" "Got Money" "The Sky's the Limit" "Leather So Soft" "Milli" "Stuntin' Like My Daddy" "We Takin' Ova" "Pop Bottles" "Lollipop"

Wayne joked with the crowd for much of the set, including my personal favorite line: "If you're going to have sex, tonight, say safe sex!"

Sometimes rap shows earn a rep for violence, but that just wasn't the case Saturday. Most in the racially diverse crowd were too excited to see Wayne, who is arguably hip-hop's most successful crossover artist at the moment.

Other highlights included Wayne sitting down to pluck (if not expertly) on his green Gretsch guitar for the song, "Leather So Soft." And while he performed solo for much of the set, Birdman came on stage to duet on "Stuntin' Like My Daddy," and then stayed on for the rest of the show. 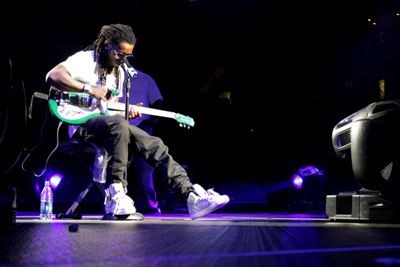 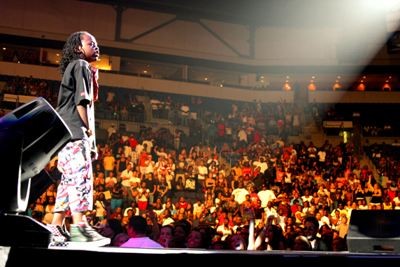 Opening up the show were local talents, including Jus Bleezy, who got the crowd out of their seats with the chant of "S.T., S.T., S.T.L.!" Lil' Chuckee (pictured) and Lil' Twist, two child rappers, also performed. Chuckee, age 12, and Twist, an eighth-grader, are best known for their own version of Wayne's "Milli," and literally lived up to the "young money" mantra.

And at 9:45 p.m., 104.1's Staci Static announced that Lil Wayne was in the building, just before Murphy Lee and the St. Lunatics took to the stage. 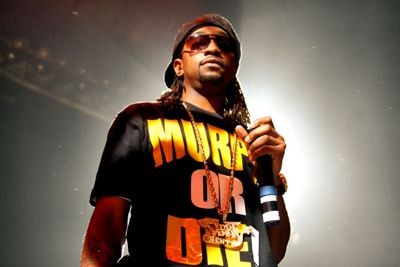 St. Louis' best-known rap group put on a show-stopping, high-energy performance. Two surprises highlighted the stellar set: City Spud, the St. Lunatics member who was imprisoned just as Nelly came to fame (and the reason for the name of the St. Lunatics' 2001 album, Free City), took the stage, as did Nelly, whose new record, Brass Knuckles, is due September 16. 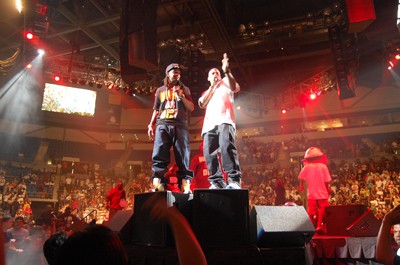 The Lunatics played all of its hits and each artist's solo songs, if only abbreviated versions of some tracks. And even if the group may have faded somewhat from the national spotlight, on Saturday night, it proved once again that it still possesses talent and drive -- and St. Louis showed them lots of love. Among the songs performed were:

Jump to comments
« So Many Dynamos as Weezer, "Buddy H…  |  Show Review: Ratatat, Panther and E… »