Show Review + Photos + Setlist: The Decemberists and Blind Pilot at the Pageant, Sunday, May 31

Better Than: Sitting at home, curled up on the couch reading Proust and listening to NPR.

The Decemberists have asked a lot of their fans on this tour. Anyone who doesn't like its new album, The Hazards of Love, is out of luck: The first part of the show is a front-to-back performance of the sprawling song-cycle, whose plot is too convoluted to spell out here. Let's just say it involves an omniscient narrator (The Rake) who's killed three of his children; a man named William who was turned into a fawn by his mother, the Queen; and William's true love Margaret, who helped free him from his fate, and thus suffers the jealous wrath of the Queen. Jealousy, murder and kidnapping - along with plenty of Scrabble words and self-indulgent posturing -- ensues.

As might be expected, the Hazards part of the sold-out Pageant show was somewhat over-the-top. Bathed in multicolored light - and shadowed by a bewitching backdrop of crinkly, tree-like stalks - the indie-darling septet progged out, dabbled in metal(!), chugged like arena dinosaurs and explored its pastoral-folk side. At times, the '70s prog- and classic-rock touches were a little much to take; think Ren Fair-cheesy, hippie-dippy and troll-under-the-bridge. (Oh, and a pre-recorded children's choir singing "The Hazards of Love 3," which represented the three dead kids, put the creepy factor off the charts.)

But the band was incredibly confident and strong, moreso than it was during its appearance two years ago at the Pageant. In fact, the entire first set felt like Revenge of the Nerds: Lit Major Edition, with the Decemberists out to prove the power of its smart, hyper-literate music.

Vocalist/lyricist Colin Meloy unleashed a wicked guitar solo like a rock god at one point, while the rest of the Decemberists - including suit-clad drummer John Moen and bassist Chris Funk, who looked like corporate dudes out on furlough - played like solid professionals. The performance erased any shortcomings with the Hazards material. (Read: It was fantastic.)

Still, the best thing to happen to the Decemberists was the addition of Lavender Diamond (a.k.a. Becky Stark) and My Brightest Diamond (a.k.a. Shara Worden) to the fold. During the Hazards section, the two contributed extra percussion, guitar, keyboards and vocals on a platform in the back - and each took center stage when reprising the character she played on the record. Long-haired Stark played Margaret as a vision of doomed beauty, a fair maiden wearing a flowing white dress and exhibiting swan-graceful/airy-fairy movements.

Worden was the vengeful Queen, and dressed the part by wearing silver leggings and a black one-shouldered minidress. She playfully vamped to the mic like a cougar stalking its prey, played up the evil-ness of her parts and wailed like the lovechild of PJ Harvey and Robert Plant. It's not a stretch to say that she stole the show, judging by crowd reaction.

Wearing tasteful black dresses, the pair returned for a cover of Heart's "Crazy On You" to end the second set - and well, it's unprofessional to just say "Holy shit!" But that's the only exclamation appropriate for the performance, which showed off the astounding range and power of their voices. To put things in perspective, Neko Case is the only lady I've seen handle Heart as well.

Their appearance was also an anomaly: For the grab-bag part of the night, the Decemberists shrank down to a quintet, meaning that the songs they played had much more basic instrumentation and arrangements. After the grand, lush Hazards set, hearing (undeniably fantastic) songs such as "We Both Go Down Together" without much adornment - or vocal additions from Worden and Stark -- was a shock and even somewhat disappointing at times. Other highlights included the Crane Wife hit "O Valencia!" (here a muscled-out power-pop tune) and the Britpoppy strummer "July, July."

Meloy, who sported Asics sneakers with his dress-shirt-and-suspenders duds, toed the line between self-deprecating and self-indulgent. Chatty and friendly during the second set, he joked about Funk's grumpiness, riffed on the band's penchant for dark material and rambled on about random topics, including how Midwesterners don't see the ocean. He also showed some riotous energy: As Chris Funk and Jenny Conlee tapped out simultaneous ragtime-piano lines during "The Culling of the Fold," Meloy danced around the stage like a marionette and hopped offstage into the photo pit. He was mobbed by the first row like a sex symbol - both before and after he sang right in some dude's face and grabbed a newsboy hat. 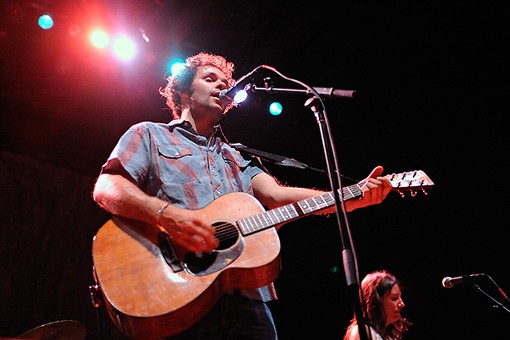 Blind Pilot opened the night with a well-received but brief half-hour set. (In fact, I haven't heard an opening act earn such rapturous applause at the Pageant in a long time.) The sextet bewitched with simplicity; it utilized banjo, upright-bass, xylophone and other whimsical instruments in a charming, homespun way that let Ryan Dobrowski Israel Nebeke's warm vocals shine at the forefront. Recommended if you like Elvis Perkins, the Rural Alberta Advantage and Fionn Regan.

Personal Bias: I was an English major at a liberal arts college; I'm required to like the Decemberists. I've lost track as to how many times I've actually seen the band, but I know the first time was at a 200-person club in Cambridge, Massachusetts (T.T. the Bear's Place), and I actually went more for the British act Clearlake. I'm also one of those old-school fans annoying enough to have wanted to hear more from Castaways and Cutouts. Really? No "Here I Dreamt I Was an Architect"? Sad panda.

Also: The dude who yelled "Freebird!" before "Grace Cathedral Hill"? You deserved to be called out by the band and flipped off by upright-bassist Nate Query. You're just lucky Meloy had a sense of humor about the entire thing.

Critic's Notebook: A male person who shall remain nameless kept sending me hilarious text messages during the set, gently mocking the prog-rock imagery and atmosphere.

Him: U heard of more cowbell?
Me: Yes. Why?
Him: More garden gnomes!
Me: Hahahaha.
Him: "That was [redacted]. This is [girlfriend of redacted]. We fled when the Children of the Corn started singing. We're at Pi."

Him: HOW R THEE MORMON WIVES COLIN?
Him: 2 HOTT!
Him: WHERE 4 ART THOU GARDEN GNOMES?
Me: Lol. I think colin is drunk.
Him: Yah, he's drunk on mead. Hahaha.