In this week's RFT, I interviewed Rick Nielsen, Robin Zander and Tom Petersson of Cheap Trick during the influential band's first appearance at South By Southwest in Austin. Read the feature here and check out the outtakes from the interview below.

Roy Kasten: Before I left St. Louis for Austin, I was looking into getting tickets for an upcoming Chuck Berry concert. Chuck doesn't do press comps. I was thinking about longevity, sanity and insanity.

Rick Nielsen: I don't think any of us had a back-up plan. I've only been in four bands in my life, and four of them Tom was in.

Robin Zander: I used to watch those guys battle it out in the Sherwood Lounge!

RN: That's torn down, and we're torn down too!

RZ: There were a bunch of bands. The Bo Weevils, the Grim Reapers. Bun E. [Carlos, Cheap Trick's drummer] had a band called the Pagans. Ooooo. Not to be feared.

It's one thing to have a work ethic, and another thing to do it in the spotlight with a lot of ridiculous expectations.

RN: We don't think about that. We just try to do everything as well as we can. We're not afraid to argue with somebody or amongst ourselves. No matter what idea someone might bring to us, we'd make it Cheap Trickish. If it's too bad, we'd say something. It's our integrity, or lack of it. We work hard. 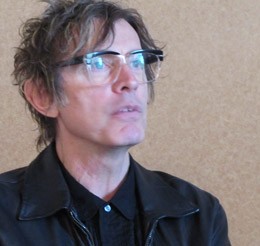 Tom Petersson: We're musicians. We write songs, make records, we tour. Let the cards fall where they may after that. Our integrity is based on our music. If you over think other things it's a waste of time.

RN: My son just heard that I was going to pose for Playgirl. Now that's not true. But I'm thinking about it now. I said [to him], the magazine isn't big enough.

Do you remember the first song the three of you, and with Bun E., worked up or rehearsed?

TP: Now you're in dad's basement.

RZ: We kind of just wrote up a list of songs that we knew. "Cold Turkey" was one of them. Hendrix. "Stone Free." David Bowie.

RN: We did Slade before Quiet Riot was born.

What was the first original song that Rick brought to you to sing?

TP: It's hard to say, because there were so many originals that were floating around since 1968.

RN: A lot of songs that should never see the light of day.

RN: There were songs like "Arabesque," weird, dancy things, but that had a quirk. Just when people would not be afraid to hear an original song and start to dance, we'd throw in some 3/4 or 6/8, just to piss them off. We didn't want people to get too comfortable.

As a teenager I wanted to be cool, but I wasn't cool. So the Cheap Trick image connected with me.

RZ: Tom and I ended up on Sixteen magazine with Leif Garrett!

And there's this comic principle built in to the image.

RN: On our first record, I wrote "The Ballad of TV Violence" and "Mandocello." I asked Tom, "Do you think I should use different names for the writers?" You could put J. Lennon on the thing and take a different name. But I looked at the world, and it's all screwed up, and people wonder where I get my ideas. Well, half from the Enquirer and half from Time magazine. Half of each is correct. The world is so diverse, why tie yourself down with one thing? We were always a band. If you have to worry, to say, oh god I'm not in my garb...I don't even own a pair of blue jeans. What would it be like to wake up and have to be Alice Cooper?