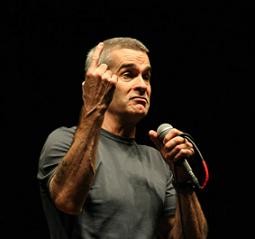 On Monday, local Republican Congressional candidate Ed Martin appeared on the "Dr. Gina Show" on KJSL (630 AM). As Daily RFT reports, Martin accused the Obama administration and incumbent Congressman Russ Carnahan of "taking away...The freedom -- the ultimate freedom, to find your salvation, to get your salvation. And to find Christ, for me and you." On Wednesday, Martin issued a statement defending his stance. (Read that in full at Daily RFT.)

Of course, talking heads such as Chris Matthews had a field day with this. And late yesterday, punk-legend-turned-spoken-word-dynamo Henry Rollins weighed in on the matter on Vanity Fair's website. This shouldn't be a surprise -- after all, in a 2008 RFT interview Rollins had no shortage of political opinions. Quote Hank in VF:

Many Americans are struggling to make ends meet. Many of them in Missouri. I wonder what Ed Martin has planned to help the people from his very good state find their salvation? What if they're just hungry? What role does faith play in those moments?

Well, at least they can always count on McDonalds to give them huge portions of comforting, artery-clogging, blood-thickening, and easy-to-afford calories as Obama's tyrannical stranglehold on Americans tightens. McDonalds should seize the moment and re-name the Happy Meal the Holy Meal and, by doing so, lead millions of Americans to their salvation. Eat, pray, shoot. No one dare stop you.