Concert Review: Alice in Chains, Deftones and Mastodon Bring Their A-game to Scottrade Center on the BlackDiamondSkye Tour 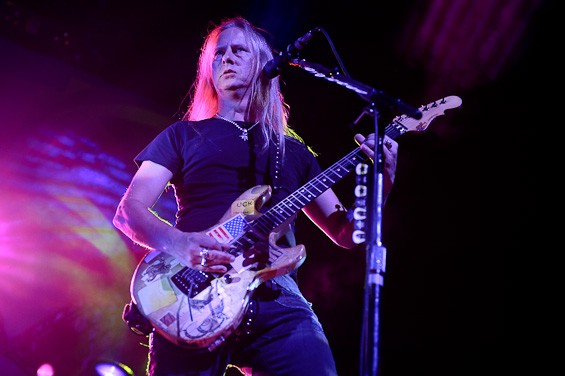 Fans got a great value last night at the Scottrade Center as three different acts put their spin on the hard rock/metal genre to give the crowd a good head-banging time.

Named after a word from each of its bands' most recent album title, the BlackDiamondSkye tour features Alice in Chains, Deftones and Mastodon. The bill is well chosen as each act works in the same territory but is distinct enough to provide variety. Each group followed through on the promise of the lineup and the transitions between acts moved efficiently, thus providing one of the more satisfying concerts in recent memory.

Mastodon opened with a short but sweet set to an audience that would roughly double for the following acts. The quartet's prog-metal attack has been sharpened through years of touring, to the point where the group can whip through complicated arrangements of epic songs, frequent time signature changes and dazzling technical riffs and solos without breaking a sweat. Mastodon did all of that last night, but they always played as a group in service of the song, which made their show a thrilling display of both musical talent and craftsmanship, even if some of the intricacies were lost in the loud sound. 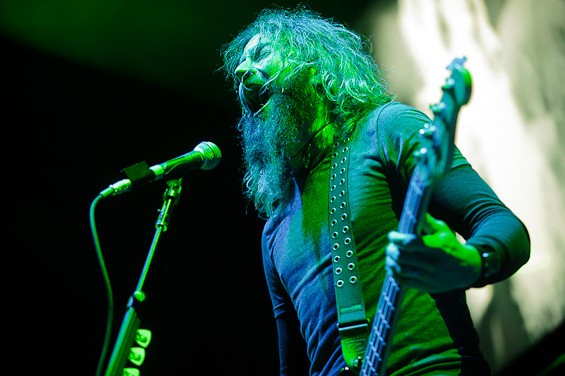 Of course, Mastodon is also smart enough to get out of the way of a bitchin' riff and lay down some simple, brutal grooves. Some of these moments accounted for their set's highlights - "Crystal Skull's" punishing triplet fills and "Blood and Thunder's" pounding main three-chord riff stood out as especially heavy. The eight-song set was over all too quickly, but Mastodon pleased its fans and successfully primed the pump for the rest of the night.

After a quick break, Deftones took to the now revamped stage (featuring a wall of lights and a ramp at the center edge for frontman Chino Moreno to climb so as to lord over his fans). Blasting off with "Rocket Skates" to the accompaniment of strobe lights, Deftones turned in a crowd-pleasing mix of new songs and old favorites that showcased the group's alternately dreamy and menacing sound.