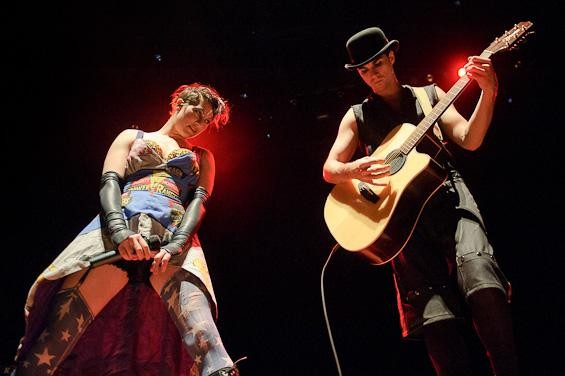 Halfway through its 10-year anniversary tour, the Dresden Dolls hit the Pageant with the bombastic fury, humor and authenticity borne of two tight musical partners playing in celebration and remembrance.

Click here for a full slideshow of The Dresden Dolls at the Pageant.

The pair then slithered into their sneering Lolita tale, "Missed Me". While Palmer adopted the personae of a young seductress, Viglione alternated between tapping the song's simple rhythm, and cabaret-inspired antics. Stripped of his shirt and sporting a black bowler, he acted out the song with his drumsticks as props, going as far as to salaciously lick them as Palmer growled, "If you fuck me, Mister, it must mean you love me."

Eventually Viglione's mugging got the best of Palmer, who giggled through the end of the song. But even with the distraction, she still managed to be haunting, funny and over the top.

They laughed off such minor mistakes -- the occasional false start, forgotten lyric, or laughing spell. These moments weren't negative; just signs of a band more concerned with the experience at hand than following a set routine each night.

Palmer blamed her distraction on the new flat-screen monitor behind the bar. She read the list of upcoming shows, commenting on the bands. Viglione said, "I'm starting to feel alienated by the TV."

"We don't need the television, Brian. We have each other."

For Neutral Milk Hotel's "Two Headed Boy," they returned to acoustic guitar and vocals. Away from her piano, Palmer glided around the stage, playing to all corners of the house, before descending into the pit. The crowd parted for her, touching her outstretched hand as she made her way to the rail. Above her, Viglione took center stage, screaming along without a mic.

From there, the Dolls did Carole King's "Pierre," then "Boston" by request from an audience member who initially requested "Coin-Operated Boy." Before the latter, Palmer laughed about getting a request for a song they play at most shows. During the song, Viglione went into cabaret mode again while Palmer extended the song's ending and intensified its hidden fury.

For "Backstabber," Palmer told the story of making the song's video at the Pageant while opening for Panic! At the Disco in 2006. By a show of hands, she deduced that three audience members discovered Dresden Dolls at that show -- and then dedicated the song to them.

The pair brought audience members onstage to sing backup on "The Jeep Song." Even though Beatle Bob attempted to steal the stage, one woman stepped forward, ignoring him, and, in her dancing, was as spontaneous as he was predictable. If she knew she'd upstaged him, she didn't let it show through her joy.

The set ended with the progressive rage of "Dirty Business," "Pirate Jenny," culminating with the fading-sanity frenzy of "Girl Anachronism."

Viglione returned for the encore, crawling on all fours to the front of the stage with his guitar. As Palmer began singing "Mein Herr," it took a moment for the spotlight to zero in on her; she'd taken to the balcony, where she swung a leg over the safety bar, laid flat on her stomach and writhed her way around the perimeter. Below, people abandoned their seats for the floor so they could see her progress, all while she belted out the song with a furor and depth unmatched by any incarnation of Sally Bowles.

"Now, how the fuck do I get out of here?" she asked after the roar of applause subsided. Viglione noodled a bit of Guns n' Roses' "Patience," awaiting Palmer's return for "Sing," performed as delicately as the show's opener. The audience followed the song's command, singing along to what would have been a fine message to send people back to their real lives -- just sing.

Except the Dresden Dolls didn't stop, instead closing the show with an enraged take on "Half Jack." The song opened with an extended attack that again evoked Viglione's heavy metal roots before Palmer rampaged through the howling fury of the song, sending the crowd away with the snarling demand, "Run, Jack, run."