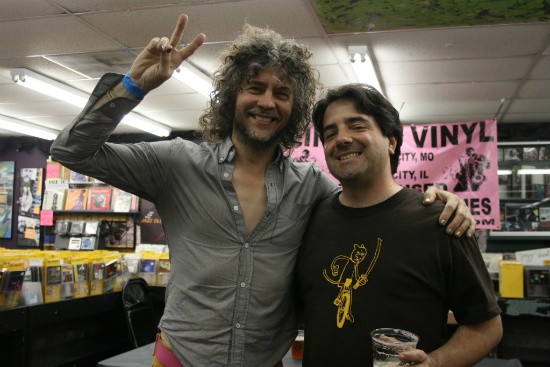 Typically, it might seem a bit odd to send a reporter to cover an in-store signing. What's there to report? Some famous dude(tte) signing autograph after autograph, making impersonal chit chat and rushing off fans, inevitably leaving a bad taste in many of their figurative mouths.

But sometimes, things are just more special than that. Like when your neighborhood record store gets a phone call from the Flaming Lips' management to let them know that yes, they will be getting a shipment of the Lip's new Gummy Skull/usb drive 4 track release and split 12"s with Neon Indian- and, oh, by the way, Wayne Coyne can hand-deliver them, if you'd like.

Check out a full slideshow of Wayne Coyne at Vintage Vinyl

The visit was planned on almost no notice -- it wasn't confirmed until around 1 p.m., just a few hours before the 6 p.m. signing. Despite the lack of time, planning and advertising, word spread rapidly via the magic of social media (and A to Z did its part -- we were as excited as anyone).

When we arrived at Vintage Vinyl around 5:30, folks were already lining up, Flaming Lips records and memorabilia in tow. The gummy skulls and singles didn't go on sale until Wayne showed up (promptly, at 6), and they sold out shortly thereafter.

Priority was given to the folks who bought the skulls and record, because, well, that was kind of the point. A second line formed for folks who didn't get to buy the new merch before it sold out (or, perhaps, they didn't want to spend $150 on the coolest 62 servings of candy ever). Schlafly provided free beer for those 21+, which made an already delighted crowd even happier.

Coyne is not your average successful musician. In watching him perform and in watching him lovingly speak to his fans, it's impossible to gather that he's anything but sincere. He seems to truly grasp the privilege and general awesomeness involved in his career and in his success, and embraces every minute of it.

Combine that attitude with a couple hundred devoted fans, and it reflects and expands indefinitely until you have a mood much like that at a Flaming Lips show -- absolutely joyful, absolutely positive. Over the course of the evening only Lips' records were played in the store -- including Clouds Taste Metallic, At War With the Mystics, and Soft Bulletin. The long line clapped, sang and shouted along to the points on the record where they would at a live show, keeping spirits high and making the line and the wait feel a bit shorter. One fan asked Coyne to sing "Do You Realize," and he sweetly sang the first couple of lines for her and her friends (swoon).

Hundreds of drug stories, personalized drawings, hugs and sweaty handshakes later, Coyne left the building. It was 11:22. This was due not only to the sheer number of attendees, but the time and attention that Coyne spent with each and every one of them. The Lips were due in Detroit by 9 a.m. today, and the band's management estimated this a nine and a half hour drive. Although down to the wire, Coyne wouldn't leave before making sure each of the fans left in the store were hugged, given an autograph and photographed with him. Here's to St. Louis' newest honorary citizens and all the patient, appreciative fans who welcomed them.