More Smart Visuals from Nato Caliph: "Not Around" ft. WhiteOut and RT-FaQ 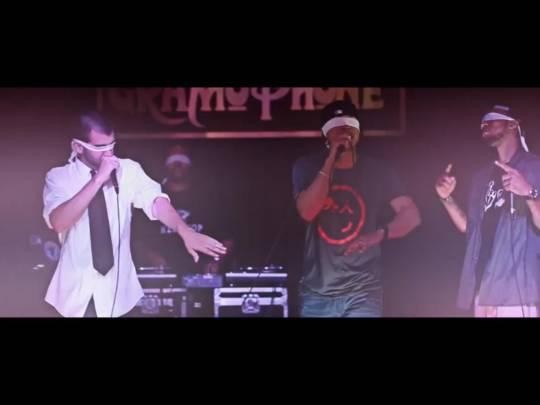 "Not Around" presents a generic visual structure, except Nato Caliph, WhiteOut, and RT-FaQ wear thin white blindfolds. The concept of the song itself is this: the three rappers explain, in third person voice, how others perceive them, how people talk about them when they are "Not Around."

"I wonder what they're speaking when I ain't standing in their presence/ And I wonder what they are thinking what direction is their heads in?" WhiteOut raps in the second verse of the Blake Symphony-produced song off WhiteOut and RT-FaQ's The RT and WO Show mixtape.

The symbolism of the blindfold is direct and clear in the video, which was directed by Joseph Lombardi of Aztech Productions. However, the message is powerfully understated through a juxtaposition with traditional music video metonymies. Take out the blindfolds and the video becomes: scenes of three rappers performing on stage peppered with scenes of each rapper walking through a crowded dance floor or rapping the the background of a party or standing in the middle of an empty and dark city street. The blindfolds are essentially dropped into this familiar rap video context. Consequently, the message, the symbolism, is intensified, seizing your attention like a cell phone screen in a movie theater.

As always, Nato Caliph uses his music videos as artistic extensions of his songs' storytelling.

So here it is: