Listen To A New Song From The Peach EP, Which Comes Out Tomorrow 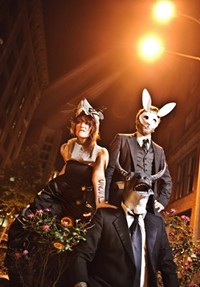 Alt-rock newcomer Peach will release its debut EP tomorrow at the Heavy Anchor. Its six songs are ballsy guitar thrashers; the lineup (Peach, Bruiser Queen and Ellen the Felon and the Mattronome) deliberately comprises women-fronted rock bands. The show starts at 9 p.m. and is free. Plus, if you buy a copy of the EP, your PBR is on the band as long as supplies last.

Listen to "T-Minus" below -- In his Homespun review of the EP, Christian Schaeffer says, "When these forces collide in a taut give-and-take, as on the teasing stops and starts in "T-Minus," the trio makes its unchanging palette sound huge." The entire review can be found after the track.

The local guitar-rock trio Peach hearkens back to a simpler time, when sludgy alt-rock moodiness and strident female singers could shake the foundations of the boys' club. Lady-led bands like Throwing Muses, Veruca Salt and, later, Sleater-Kinney could rock harder and smarter than most while offering a female-driven focus. Radio-ready modern rock has largely returned to a for-bros, by-bros situation, so there's something both nostalgic and refreshing about Peach's no-frills approach. Singer and guitarist Melissa Roberts is unretiring, pushing her oft-quavering vocals to the front, and she's able to convey vulnerability without sounding maudlin. The six songs on the Far From the Tree EP find the band running confidently in one direction, but one direction only.

The quick-start thrash of opening song "Itty Bitty City Committee" recalls nothing so much as the Foo Fighters, and the band can wield big chords and shifting tempos with confidence. When these forces collide in a taut give-and-take, as on the teasing stops and starts in "T-Minus," the trio makes its unchanging palette sound huge. And it's those moments of tension and release that give Roberts something to push off of, and her vocals range from a banshee howl to a confessional whisper across five minutes. But too often, Peach settles into a monochromatic drone. Save for the acoustic title track, the guitar work is stuck on the same crunchy overdrive tone, and Alex Powers (bass and guitar) and Mark Easley (drums) move these songs forward but can't alter the overall flavor. Taken one at a time, the songs are propulsive, energetic and occasionally catchy; in sequence, there's not enough here to distinguish one from the other. For a new band, though, Far From the Tree has more than enough to build on -- if the music and arrangements can push Roberts' already-strong voice to new places, Peach could add something new to the mix.