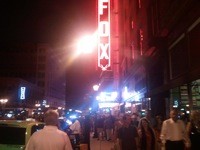 As a default, Walter Becker looks like he just ate something sour. A response to the Internet age, perhaps, where you get to be a famous band through luck and novelty and a Twitter-length back-story. He doesn't say much early on at Steely Dan's nearly-sold-out show at the Fabulous Fox until halfway through "Hey Nineteen," when he steps up to the microphone.

"We're still in the broad shank of summer," he begins, grinning. The full moon, low in the sky, is like a rotting melon, he continues, and in these troubled times of broadband, hyperspeed media, "you take your amusements where you get them. If you find music you love, you go to it." He makes the assumption that is what brings us here tonight, and a resounding, impossible-to-fake cheer rises in the old theater. "So you bliss out on the music," he says, then he describes the drive home, back to life, back to your "rathole." It's nothing personal -- he feels the same way about his hotel. "Rathole," is just real life in 2011. We're all in it. You stop on the way home, he imagines, for a little something to drink with your loved one. You take it out of the bag, and what did you buy, he wonders.

We all know the answer. It wasn't gin, he says, it wasn't Scotch or brandy or rubbing alcohol or any of those. "You bought some lightning! You bought a bottle of magic from south of the border!" he cries. "What did you buy!" and he steps away from the mic as the lights come up on the trio of backup vocalists, the Embassy Brats, as they sing, "The Cuuervo Gold! The fine Co-lumbian! Make toooonight a wonderful thiiiing." Say it again.

Steely Dan's commitments are not difficult to ascertain. They never have been: This is a duo that seeks total perfection, that famously labored over recordings and didn't tour for years because of the risk of ruining that spotless music Becker and his partner Donald Fagen worked so insanely hard to achieve.

The band the two tour with today, the Miles High Big Band featuring the Embassy Brats, is capable of damn near perfection. There are professional symphony orchestras that hit more wrong notes and don't mesh as well as this group. Each of them is beyond technical ability; the accents and soft harmony are as impressive as the jazz-inflected solos. You forget, until you see Steely Dan live, how challenging and intricate its music is. It's easy to do because everything is wound together so tightly as to enter your brain like Vaseline.

Maybe this is not your bag -- maybe you like your music to sting you out of your routine or maybe you want it to rip into your emotions or turn you on. But if it's endless aural bliss you seek, it's tough to beat Steely Dan.

Last night's set featured the expected hits ("Peg," "Deacon Blues," "Aja," the latter of which received the first of many standing ovations. You will note it was three songs in.) and some surprising gems ("Bodhisattva" and the Brats filling in for David Palmer on "Dirty Work" were especially rewarding).

The crowd, admittedly not the hippest or youngest, was nevertheless genuinely ecstatic. The cheers were not perfunctory -- it was honest appreciation pouring out of these thousands. And if there were a few dozers down in front, I will choose to believe even they were satisfied, lifted literally out of consciousness by the band. It's not often that you can describe a band rendering parts of its audience comatose as a success, but Steely Dan's music is hypnotic; on more than one occasion I forgot to write down the name of a song in my set list until it was nearly over because I was so thoroughly removed from reality.

The show's ends were of particular note: The band played Duke Ellington's "East St. Louis Toodle-Oo" as an intro. The song also appeared on Steely Dan's Pretzel Logic, but it was clearly done as a nod to the setting -- it was the one variance to the Shuffle Diplomacy Tour's set list. And the encore, "Kid Charlemagne," induced a surreal dance party, with middle-aged couples bum rushing the aisles and the whole packed theater on its feet.