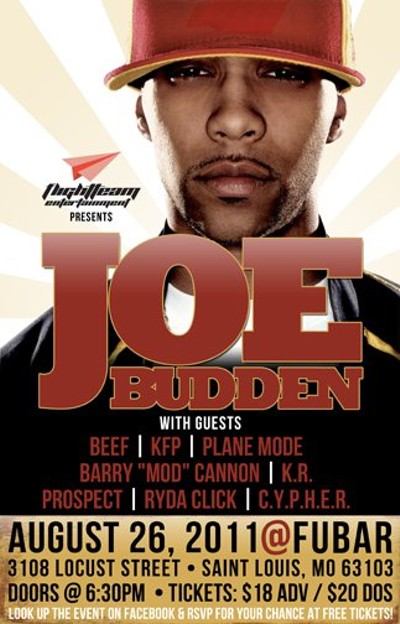 Joe Budden is not an asshole -- or at least that's what his merch would have you believe. (Literally: "I'm Not An Asshole" screams from the t-shirts he's selling.) While an obnoxious slogan probably won't be enough to convince anyone who's been following his career for the past few years, a small crowd of his devoted fans came out to support the New Jersey rapper for his first solo performance in St Louis.

The undercard lineup started a little before 8 p.m., making the show a five-hour-plus event. The roster included several low-profile local acts: Man of Destiny, K.F.P., Plane Mode and Ryda Click, to name a few. There were varying amounts of skill and experience on display, but the standout set came from an emcee from south city, who (appropriately enough) goes by the name Prospect. A good chunk of his music was mixtape material - the artist rapping over other people's songs. His stage presence and slick bars compensated for the lack of original beats.

Joe Budden inconspicuously rolled up to the venue in a black minivan around 11:15, with his hypeman and what appeared to be his current ladyfriend. He stopped briefly outside to huff a cig and take a few pictures before heading into Fubar, and the place started to buzz as the hardcore fans staked out their spots near the front of the stage. Budden's DJ, Killa Touch, tried to get the crowd warm with a few east-coast classics (Mobb Deep, Biggie) during the sound check, and then Joey B. finally took the stage at around 11:40.

The set opened with "Come Along" from last year's Mood Muzik 4, followed by his verse from Slaughterhouse's "Microphone." Budden's delivery favored style and finesse over anger or aggression, although he did amp up a little for the faster-paced songs like "Pump it Up." Most of the more recent songs he performed ("Exxxes," "Black Cloud") are full of emotional content, but often without the same "moody" tone of artists such as Drake or Kid Cudi.

As his fans can tell you, Joe Budden's music is about the lyrics above all else. His appeal lies more in his biting punch lines and layered metaphors than in his beat selection. Unfortunately, anyone who didn't have the lyrics memorized may have missed something thanks to the venue's sound, which was loud and a bit muddy. Some performances suffered from it more than others, but since Joey already has the kind of voice that sounds like he just woke up, it felt like a chore at times to try and pick out the words.

The audience's knowledge of Joey's music was ultimately put to the test during a bit that he said had been an "epic fail" the previous night in Chicago. Three volunteers were invited onstage to perform a Budden verse of his choosing. I don't think any of them will be signing with Shady/Aftermath in the near future, but nobody embarrassed themselves too badly (although the first guy was booed for only having been a fan for two years).

Although he's used to playing much larger shows back east, Budden gave an 80-minute set aimed directly at the diehard fans, who appreciated every minute of it. He actually seems like a personable guy, despite playing into his "asshole" reputation by ribbing the audience a little between songs. He ended the show with the eight-minute reprise of "All of Me" just after 1 a.m.

Jump to comments
« The Roots Has Canceled Its LouFest…  |  LouFest Day One: Band-By-Band Revie… »