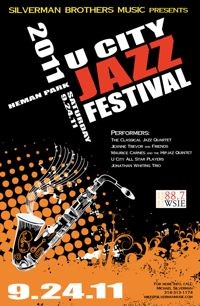 The municipality of University City in recent years has been known for producing a number of successful jazz musicians, including pianist Peter Martin, trumpeter and singer Jeremy Davenport, saxophonist Todd Williams, and bassists Neal Caine and Chris Thomas.

Now, thanks to the efforts of two more of its homegrown jazz players, the town is getting its own U City Jazz Festival, a free outdoor event that will take place from 11 a.m. to 7 p.m. this Saturday, September 24 in Heman Park, on Olive Boulevard between Purdue and Pennsylvania Avenues.

The festival is the idea of brothers Mike Silverman, a pianist, and Rob Silverman, a drummer, whose bands include Downtown Trio, Bach to the Future, and the Classical Jazz Quartet. (The Silvermans and their frequent collaborator, bassist Matt Bollinger, also were the house band for KPLR's Sunday night sports program The Fan Show for a couple of years.)

"The beginning of the idea was in 2003," said Mike Silverman. "We recorded an album called U. City Blues. It was sort of an homage to growing up in the rich environment of U. City, and that's when we started thinking that it would be nice to have a jazz festival. It just seemed like a natural thing to do, but we weren't a position to be festival organizers at that time."

Fast-forward to 2011, when, thanks to brisk sales of their music on iTunes via their own Autumn Hill label, the brothers found themselves with sufficient time and money to revisit the idea. "We contacted the mayor last spring, and she said, 'Let's do it,'" said Silverman. "We set a date, and now I had to put together a festival in just a few months."

Silverman's first thought was to stage the event in the Delmar Loop, but the logistical and permitting challenges were too much to overcome in the time available. The alternative was Heman Park, already home to a summer concert series sponsored by the city. Silverman said the city agreed to waive all fees for use of the park, to provide security, and to let the festival use the city-owned mobile stage. "Now we're pretty excited about that, because it is where people in University City come to hear concerts," he said.

To put together the musical lineup, the Silvermans relied on their personal connections and knowledge of the local scene. "We decided right at the beginning on particular roles we wanted to fill," said Silverman. For example, "we wanted to have a local legend, and we got (singer) Jeanne Trevor. She's someone I've always liked."

Silverman said he also wanted to include a Latin jazz group and a tribute to a famous jazz musician. Pianist Phil Gomez and his group Clave Sol were chosen to fill the former role, while drummer Maurice Carnes will handle the latter, playing the music of saxophonist John Coltrane with a group including pianist Ptah Williams, saxophonist Freddie Washington, bassist Ben Wheeler, and guitarist Chris Burchett. The Silvermans' Classical Jazz Quartet and a group of student musicians billed as the U. City Young Lions will complete the lineup of performers. Jazz broadcaster Don Wolff will be on hand to introduce the acts, and the event also will include a workshop for young musicians, held at the beginning of the day and led by Carnes, guitarist William Lenihan and pianist Kara Baldus Vandiver.

"One of the special things about this festival is that it's free," said Silverman. "We always admired that about Webster's festival - it's free, outdoors, and family friendly, and that's what we wanted to have."

"We basically put up the money ourselves, but we did get a lot of media sponsors," he said. "We're getting a percentage of food and beer sales, and we're hoping that gets us close to breaking even, but it's not a business venture - it's a musical venture. Our intention is so pure. We really just wanted to do something for U. City."