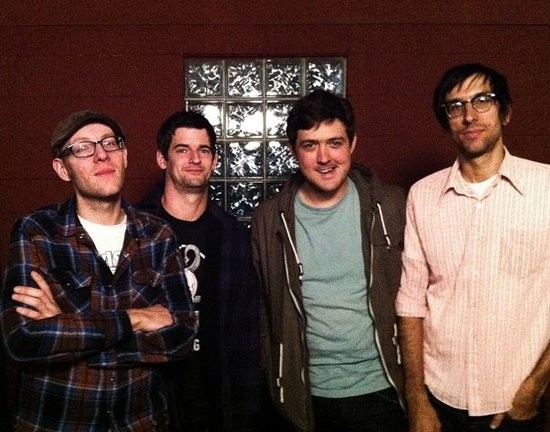 The best pop band in St. Louis has just added a second guitarist, perhaps in attempt to more embody the RFT Awards Best Rock Band category it was placed in this year. Man, awards are so confusing! Regardless, this is a change that's been percolating for a little while -- the guitar work you hear on this summer's excellent With A Bang really demands more than one player live. And so it shall be: The first time you can hear the new, four piece Blind Eyes is in Edwardsville at the Stagger Inn...Again on October 22. For those of you adverse to Illinois, the new lineup's first St. Louis show will be at the Firebird on November 11. We talked to drummer Matt Picker about why the band decided to add a new member and what this will mean going forward. Hopefully, we'll finally get to hear "Best Times" live.

RFT Music: How do you know Andy?

Matt Picker: We've all known Andy for a pretty long time. When he was in Shame Club, they played with us at the first Blind Eyes show ever. But we pretty much just know him through the music scene and mutual friends. He's always been really into the band and is an amazing guitar player, so it was a perfect match when we decided to give it a shot.

How long have you been thinking about adding a second guitar?

We really started seriously considering it when With A Bang came out, and we realized how much better a lot of the new songs would sound live with that extra layer of guitar in there. But truth be told, it's something we've always thought about doing, off and on, since day one. Andy was always our first choice any time the discussion came up. Luckily, it worked out for everyone.

How do you think this changes the band?

I think it'll really up the ante on our live shows, first and foremost. Just having that extra punch of guitar and vocals on the songs. It'll open things up for us to do start playing some songs we might not have been able to pull off otherwise and maybe freshen up some of the older stuff a bit. On a totally different end of the spectrum, we're pretty excited about having someone new in the mix to bounce ideas off of, and to contribute to new songs as they start coming through.