Caleb Travers' New EP Comes Out This Friday: Listen To 'Vampires Of This Town' Below 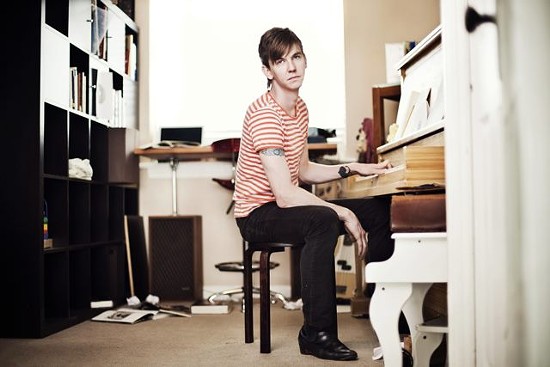 Caleb Travers' new EP, Ain't No Jukebox, gets an official release this Friday at Off Broadway. Describing the effort in this week's Homespun column, Christian Schaeffer says, "Travers has created a stripped-down but melodically rich document. The strings give a classical, stately lift to the songs, while straightforward acoustic guitar fills in the rest. That leaves plenty of space for Travers' deep tenor voice."

Below, listen to the EP's lead track, "Vampires Of This Town," which exemplifies the EP's slightly older and slightly wiser warmth. The rest of Schaeffer's review is also down there.

"Vampires Of This Town" by Caleb Travers

When Caleb Travers released Blue Weathered Dreams with his then-backing band Big City Lights in 2007, his lovely, sonorous voice and Ryan Adams jones helped make his small-town story-songs stand out. In the intervening years, he's tackled fatherhood, tried on a harder-rocking approach and eventually settled back on a smarter, gentler sound. Featuring strings played by local pros Asako Kuboki and Ranya Iqbal (from arrangements by Charlie Brumley of the Educated Guess) and some upright piano work from both Brumley and Dave Grelle, Travers has created a stripped-down but melodically rich document. The strings give a classical, stately lift to the songs, while straightforward acoustic guitar fills in the rest. That leaves plenty of space for Travers' deep tenor voice. Recorded at home, with mixing and strings recording done by Sawhorse Studios' Jason McEntire, Ain't No Jukebox is a fine reintroduction from a songwriter who has stayed away long enough to be missed but not so long that he lost his touch.

From the start of this seven-song EP, Travers' country-rock roots slip through even in an acoustic setting. Opening track "Vampires of This Town" -- with its opening shot "take me out tonight/I feel like getting high" -- sounds like it was written to be an open-highway rock song, but the chopping cello and doubled vocals give it a more relaxed feel. That mellowness transfers to the songwriting as well; where earlier songs like "Annie" and "Wedding Day" had more than enough well-tailored angst to go around, the tracks on Jukebox veer toward the sunny. "Close Your Eyes" bounces along on a hopeful note, and "Paris, 2nd Best" finds beauty in diminished returns. And as rock & roll dreams downshift into something softer and plainer but no less fulfilling, that's a good lesson for all of us.

Jump to comments
« What Is That Smell? The Five Most I…  |  Ten Musicians Who Support Occupy Wa… »