The off-the-cuff playoff run song is a time honored tradition, practiced by professionals and, ummm, amateurs alike. And what might start as straight-up fan enthusiasm might wind up being a solid career move. Just ask U. City's Vega Heartbreak, whose "Rally Song" has racked up some 50,000 views on Youtube.

"The radio stations called me and said it's the most requested song in the city," he says, referring to Hot 104.1 and Z107-7. That makes some sense -- as anyone who has gone to a show in the past month can attest, the Venn Diagram that illustrates the city's factions of Cardinals fans vs. music fans looks like this, where the Cardinals bubble takes on an expanding-universe type quality with a run to the World Series: 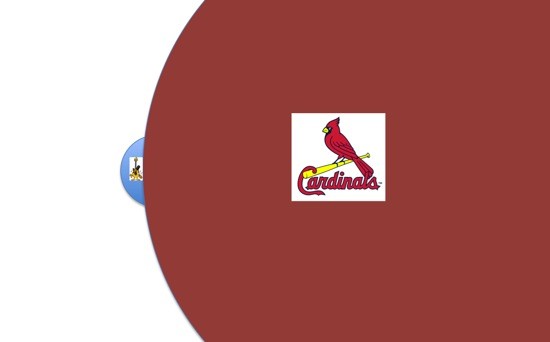 Though of course all the Cardinals tribute songs haven't seen quite as big an explosion as Vega. "I didn't do anything. It just grew organically," he says. "I just made this for my favorite team, ever: the St. Louis Cardinals. That's all I had in my mind -- my city and my team."

He's not alone there: Below, a few more local tributes to the Redbirds, including one eleven-year-old's tribute to Vega's tribute. Oh, Internet...

This is just a sampling of a couple that stood out to us for one reason or another. Please, by all means, share your favorites in the comments.