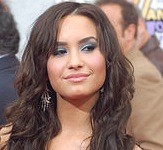 Say what you will about the Black Eyed Peas, but its appearance in this year's Super Bowl made perfect sense, in a lot of ways, because it is the Super Bowl of music acts -- incredibly loud and expensive, bombastic, followed out of a strange sense of pop-cultural duty, covered in strange body armor, etc. The NFL aims at pop culture's bland, enormous middle, and they nail it every year.

Major League Baseball aims at -- moms, I think? And their daughters, maybe.

The 2009 All-Star Game here in St. Louis featured Sheryl Crow; 2010 was Train singing "Hey, Soul Sister." And in Game 5 of the 2011 World Series they trotted out Dallas native Demi Lovato for the National Anthem. Because baseball fans love Sonny with a Chance! (It's called that because, like, her name is Sonny, and her pluck gives her a chance to be famous.)

Not to be denied, the Cardinals will apparently be calling on difficult-to-Google R&B singer Joe, who is from neither St. Louis nor Dallas but had a hit ten years ago with "I Wanna Know," for Game 6. So far as I can tell he will be performing the anthem because his new album, The Good, The Bad, The Sexy, came out last week.

I get it: Baseball's target market is thirtysomething white males, and unless you can get Pavement to reunite every other day, playing to that market isn't going to get you a lot of pop-cultural cachet. But even if the goal is to book some huge acts that are total non sequiturs to their audience they could do better than Demi Lovato, Train and Joe (singer). For several years now baseball's desired musical target appears to be people who were never relevant to most baseball fans and were relevant to people who don't care about baseball between two and five years ago.

You wouldn't realize this from its ham-fisted attempts to market themselves with last year's music stars, but baseball is actually as culturally relevant as it's been in 50 years, apparently in spite of its booking department. If they want to get big names that don't mean anything to people who watch baseball, they could probably get actual big names.

For 2012, then, it might be wise to aim higher than this leaked copy of their plans for the next World Series which I'm not making up:

God Bless America: A different member of the Backstreet Boys every night