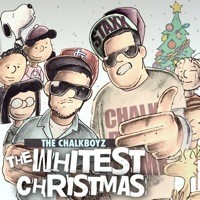 Dommy Shades and Dyl Staxx of the Chalk Boyz didn't have to dig too deep for inspiration for their new mixtape Whitest Christmas. "We were drinking egg nog and whiskey for a day straight and decided to make a song about it," says Dommy. "Later it made us both sick."

But that's only one part of the Chalk Charm. To full appreciate the group, it's also important to note something else: "To get in the Christmas spirit we bought a bunch of presents, wrapped them and gave them to strangers around the city," he says. "Theres some footage of that in the next video we're dropping." Update: The video has dropped. Watch below, please, for the love of Christmas, watch below.

Also, there is literally a track on this thing called "Jewish Dough." No comment. Listen to the whole thing below.

"My WishList" by Chalk Boyz