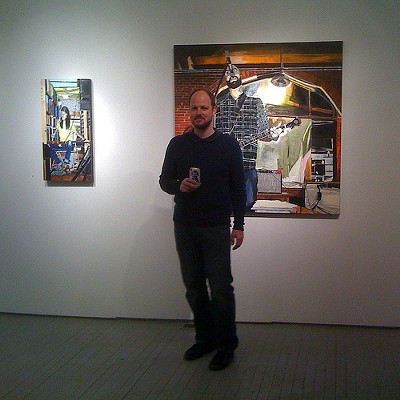 For local painter Dana Smith, art and music have always been intertwined. He can he found in the dark corners of music venues, his face obscured by a large lens, capturing live shots of local bands that he'll later use as a guide for his paintings. The sounds, sights and people of St. Louis are his muse -- Smith finds constant inspiration in the friends, music and buildings that surround him. And though he is, in all respects, a guy who prefers to stay behind the camera, his soft-spoken exterior masks a prolific artistic dynamo.

Smith spent his teen years traveling the country as a sponsored skateboarder. It was during some adventures on the West Coast that he first encountered designers who did graphics for skate companies, artists and photographers. He explains, "I was always interested in art but never knew how to approach it. But on those trips, I met people who would just do it."

Even though he didn't have any training or any idea what he was doing, one day when he was about eighteen years old he just started painting. Around this same time Smith began many years a musician the South City music scene, playing in the Wormwood Scrubs, the Baysayboos, Asbestos Sister and Cloister. He found ripe subject material in the bands he frequently watched and shared stages with, and eventually decided to concentrate his efforts on painting the local musicians that he felt compelled to celebrate.

Over time, this hobby turned into his passion. He now paints for hours nearly every day, sometimes working on three paintings simultaneously. Smith's love for the music is clearly infused into his alive, vibrant canvases. There's something about the way that he presents light and movement that allows his paintings radiate energy. He captures not just big rock scenes, but the smaller moments, too -- giving the observer the feeling of actually being at the show. This unique quality has put Smith's work in high demand. In addition to filling requests from individual patrons, Smith has also been commissioned by local businesses, including the Royale on South Kingshighway and the Old Rock House, where he works as a sort-of artist-in-residence, painting many of the national touring acts that have played the venue.

Smith's talents have been tapped for other music-related projects, as well. He's illustrated show flyers for friends' bands (including Gringo Star), provided artwork for Vintage Vinyl's Record Store Day compilation release, had pieces featured on the music website Daytrotter.com and his painting of Bunnygrunt was used by the band as the cover of its last full length album. 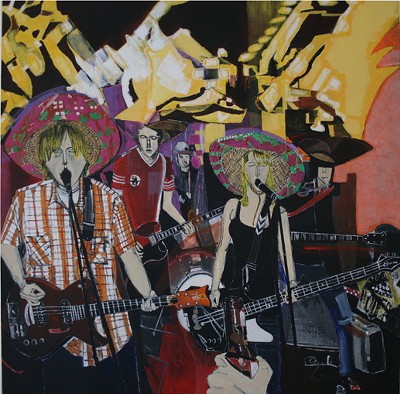 Smith's documenting skills also extend to the venues and spaces that housed these performances. Places like the Duck Room, the Firebird, Frederick's Music Lounge, the Hi-Pointe, Lemmon's, Mad Art Gallery, Mississippi Nights, Penny Studios, Radio Cherokee, the Schlafly Tap Room, the Sheldon Ballroom, the Typo Cafe, the Way Out Club and White Flag are all represented in his paintings and illustrations. Details like the diamond-shaped wood wall design at Off Broadway (now hidden behind the red curtain) and the neon beer signs at CBGB fill the background of his pieces, offering familiar clues to the location of the performance and adding extra depth and detail to Smith's paintings.

Smith's first proper retrospective of his work with local bands is being held this month at Fort Gondo Compound for the Arts on Cherokee Street. The show is called Southtown Famous (a nod to the Bunnygrunt song of the same name) and it will display about 40 pieces of Smith's work throughout the years. The opening is this Saturday, with music supplied for the evening by .e, of course. The show runs though February 4th, and Fort Gondo is open every Saturday afternoon. Read our interview with the artist on the next page and then go check out some paintings of your St. Louis musical heroes and neighbors.