Why Ryan Adams Isn't Allowing Photos On His Current Tour 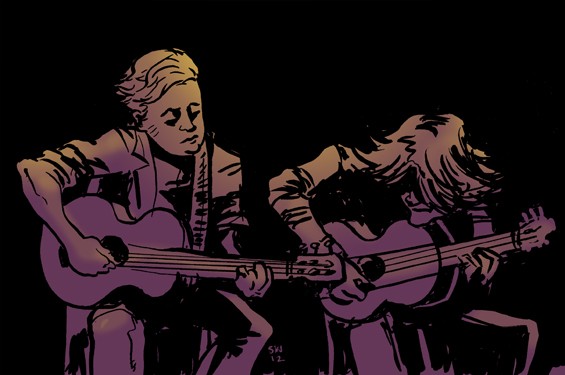 On Tuesday, Ryan Adams' solo tour brought him to St. Louis. You can read our review of the show, but you will note that we have no accompanying photos. Instead, we sent illustrator Sam Washburn, who returned with three pieces from the show. You can download hi-res versions of all three below.

On this tour, Ryan Adams is playing solo in theaters with powerful acoustics. Representatives of the artist say he is not allowing photography at all the shows in order to cut down on possible distractions for other audience members.

The restriction is not being taken lightly. This reviewer from Louisville.com reports strict enforcement on the Louisville stop on Monday, saying, "And if you were so foolish as to even flash the backlit screen of your phone momentarily, you were descended upon with klieg lights and a stern admonition to PUT AWAY YOUR PHONE."

Adams is certainly not the first artist to refuse photos on tour. Kanye West did it for his Glow in the Dark tour in 2008, though the reasons were different -- he was hoping to keep his elaborate staging as much of a surprise as possible.

And while concert photography may seem like a distraction or nuisance to some artists, there's no doubt that it is a valuable part of a music fan's overall experience. Whether you were at the show or not, a great concert photo tells you something about a musician. We have seen many that change the way we feel about an artist and therefore how we hear her work.

Washburn's illustrations are great documents, but they're very different from photography. What do you think? Is the risk of a quiet moment broken by jostling cameras and clicking shutters worth the tradeoff? Let us know in the comments.