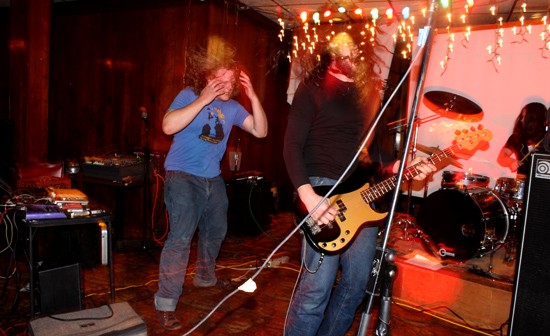 El Lenador has become a ganglion in South St. Louis for raw performance art, be it in the form of punk rock or wiry folk music. Nights like Friday, February 10th, where Austin-natives Bloody Knives were welcomed by local stalwarts for an evening of loud, messy psychedelic music, have become a norm in the city.

Trauma Harness kicked off the night with reverb-drenched guitars and schizophrenic vocals. Singer Josh Jenkins frequently crossed the line between screaming and crooning. All the while, drummer John Birkner beat the hell out of his kit. Trauma Harness soon made way for the six-piece Tone Rodent, which brought a Theremin and meaty synth-parts mixed into guitar-led psych-rock. The set was lumbering and heavy, rife with thick texture.

Far from the traditional rock band, Bloody Knives hit the stage with crunchy bass guitar, freight-train drumming and a member solely dedicated to synth-samples and noisy sound-loops. Each song was elevated by roaring singer Preston Maddox. Every damn foot in the room was kept tapping by the low tones and solid beats these hot-blooded Texans had to offer. Jim Moon kept charge of sound manipulation, but frequently left his console to boogey down and swing his hair like some sort of '80s metal Glam-God. Bloody Knives kept the room warm while avid show-goers waited for Bug Chaser to throw down.

I'd seen Bug Chaser play a few times before, but no show was so on point and simply brimming with energy. There was a clear synthesis in the guitars, visual projections and auxiliary percussion in the early songs.

Singer Pat Grosch started the set off strong with bellowing vocals that eventually diverged into throaty yells as the crowd delved into a sweaty mess. Shirts were thrown off, beer was spilt and by the end of it we were just as exhausted as St. Louis' self-proclaimed most futuristic band.

Jump to comments
« Teengirl Fantasy at the Gargoyle, 2…  |  Kem and Babyface at the Chaifetz Ar… »