Tumbling Down the Rabbit Hole With Mr. Gnome's Nicole Barille 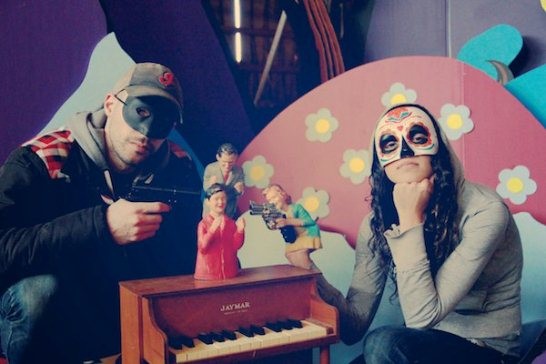 In a literal sense, it's possible to put Mr. Gnome in a container. After all, the Cleveland-based band merely consists of two members. And they don't seem to take up that much physical space.

But pushing Nicole Barille and Sam Meister's music into rigid categorization is difficult - and unwarranted. On the band's cheeky blog is a long-and-winding list of groups the duo has been compared to: Massive Attack, PJ Harvey, Tool, Portishead, Cat Power, Pelican, Death From Above 1979, Bjork and Blonde Redhead. The herky-jerky tribute make sense: Few of Mr. Gnome's adventurous tunes sound the same, but every song feels damn good.

As quick as Mr. Gnome pushes out borderline whimsical romps like "Vampires" or "Plastic Shadow," the group comes back with serene and atmospheric ballads such as "The Way." The duo is also adept at pairing its diverse musical portfolio with fantastical artwork and stunning music videos. The band recently showcased its artistry ina preview of the"House of Circles" music video.

After a series of Missouri shows in Springfield, Kansas City and Columbia, Mr. Gnome will be holding court Wednesday at Plush (3224 Locust Street, 314-535-2686) along with Volcanoes and Bear Hive. In a telephone interview, Barille touched on what makes the band tick - and how rabbits fit into the equation. Questions and answers have been edited for clarity and length.

Jason Rosenbaum: You've played a bunch of shows in the Show Me State in the last few days. How are you enjoying Missouri this time around?

Nicole Barille: It's been fun, man. We've been having a good time. We played that Middle of the Map Festival in Kansas City on Saturday and it was a lot of fun. It was pretty insane and crazy - just a lot of people checking out music and going to shows. We're just really excited to play here and play at Plush for the first time, you know?

What sort of things do you take away whenever you play in St. Louis?

St. Louis is actually a lot like Cleveland. It definitely has the same type of vibe. And ever since [Plush talent buyer and Mr. Gnome booking agent Kris Kerry] has moved here, we've gotten to see more of the city. And he's definitely taken us around and just showed us like some spots. And it's just a really cool city. We dig it and we think we're still kind of catching on here.

We've kind of toured the West Coast and a couple other states more than here, so I think we're slowly catching on in St. Louis. But we'll always keep coming back here.

Cleveland obviously is known for being the home of the Rock and Roll Hall of Fame, but it also has a fairly vibrant music scene. For people who may not be familiar with it, tell me a little about music in Cleveland and how it influenced the trajectory of your band.

There's a really great music scene going on. There are just a lot of awesome bands - definitely a lot of rock and roll bands.... A lot of bands in that little Midwest area definitely got the Rust Belt rock and roll vibe for sure.

And just like the weather in Cleveland, it's kind of all over the place. Winters are really intense and depressing and gray. Where we live right outside of Cleveland, I think one year we got the highest snowfall in the nation or something ridiculous like that. So during the wintertime, you definitely tend to hibernate a bit - which is really good for writing. I don't think I realized that until recently, how much the weather there can affect our writing and our mood and the schizophrenic nature of our writing. Because everything's constantly changing there and it definitely affects how you write and what mood you're in when you do write.

Just from looking at your blog, you point out how many groups that you've been compared to over the years. I guess that's part of your appeal - you're not just transmitting the same type of sound every time. Is that a correct assumption?

Both Sam and I are attracted to different styles of music. We never kind of limited ourselves when we're writing music. As long as you're feeling that a song is coming from a really natural place and we're both digging where it's heading. ... As long as we're both happy with it, we'll put it on the record. You know, we're not necessarily looking for whether it fits into a certain type of genre or anything.

I think over the years us starting and developing as a band, it's been a good thing to be all over the place. It's been a bad thing too, because I think some people like to really be able to put you in like in a box and say that you're a certain genre. Cause we kind of do jump all over the place. For some people that frustrates and others dig the change that's throughout our record.

I think with every record that we're making, we're trying to make it as cohesive as possible and make it flow as we can. And I think that's always what we're going for.

What's it like being a two-piece band? On the one hand, both you and Meister have to do a lot of work to piece a song together. Of course, it probably makes the songwriting process a lot easier since you're not gauging 10,000 other band members' opinions.

Yeah, I think it definitely has its pros and its cons. I mean for us, it means definitely a lot more pros that outweigh the cons. Just like driving in general - if you have to do ten hour drives then you're only able to split it up with one other person. I would think it is much more tiring than having like five dudes, you know?

But within the writing process, it's pretty awesome to have just one other person to express your ideas with and just be really open. I think me and Sam are usually on the same page on where we want the songs to end up. So just being able to be so open with someone versus having a couple other people with opinions that you might not agree upon - we're pretty straight up with each other when we're writing and where the songs are ending up whether we like it or not.

I think that's the best part of writing, that we're not really arguing. We're going for the same goal.

Jump to comments
« Out Every Night: The Best Shows Fro…  |  Wale, Young Jeezy and Miguel Coming… »