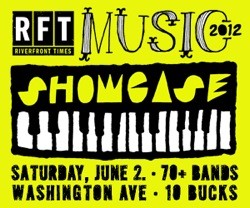 Black James Jennifer McDaniel is Black James: cloaked, apocalyptic and unapologetic with a dervish of a voice, a banjo, a boombox, a plastic fireplace and, as of very recently, a sampling machine. The hillbilly witchcraft that characterized her first few releases remains on her new forays into electronic manipulation, but the overall effect is much different. What was an encounter in the swamp has become a strange vision, with layers and voices heading at you from all sides and from various distances. It is strange but also strangely beautiful those glimmers of the childhood bliss of digging through mud seem much more valuable when they come briefly amidst the chaos that reflects adult life. Some time spent listening to her output & whether it's the readily available and free home recordings online or her mesmerizing live show & will leave you thoroughly present.

Googolplexia Elvis Presley famously opened a Las Vegas residency by announcing, "Ladies and gentlemen, before the evening's out, I'm sure I will have made a complete and utter fool of myself- but I hope you get a kick out of watching." Rob Severson, a.k.a. Pancake Master, applies that performance approach well with his one-man band, Googolplexia. Armed with only only his trademark headset microphone, an occasional ukelele or accordion, and a head full of witty, often ridiculous songs, Severson stalks the audience and mixes an almost Jonathan Richman-esque guileless sensibility with the ability to rock a crowd, whether or not they came in wanting to be rocked. Severson is also the force behind the local Pancake Productions label, and will most likely have a box full of cool merch to sell you after the show. --Mike Appelstein

Ra Cailum Focusing on Anthony Engelhardt's age is either inspiring or frustrating. At the ripe age of 20, Engelhardt has already found his voice as Ra Cailum and dropped three solid releases of artful electronic music. Last year, Ra Cailum unleashed the odds and ends collection Leaving and Returning and the Finding My Way EP, which was ranked on RFT Music's list of the 40 best local albums of 2011. On May 1, Kansas City label Think 2wice Records released Ra Cailum's Chimbus EP, a set of minimal house tracks tailored to a strobe-lit dance floor. Its title track alone will make you sweat so profusely, you'll want to buy Anthony Engelhardt a drink - unfortunately, you must wait a year to do that (legally). --Ryan Wasoba

Sleep in Sundays Eric Williger takes the complexity and comfort of childhood and distills it into something immediate, no matter what your age. His "." is a shockingly physical experience, a head trip into a strange sort of wistfulness. It is the experience of deja vu. And that's not just if you had the experience he had -- that's what makes it so great. This is a matter of relatively universal truth, and that is no small matter for someone as young as Williger. He's exploring the Pacific Northwest at the moment, but let's all hope for his return. And barring that, let's all just hope he keeps making music. --Kiernan Maletsky

Syna So Pro There's a particularly distinct image associated with one-person bands: Performers with complicated contraptions strapped to their bodies trying desperately to play a rudimentary song. Thankfully, technology evolved enough for ambitious and multi-talented performers to do anything and everything without suffering a herniated disc. Syna So Pro's Syrhea Conaway must be especially thankful for the looping thingamajigs that create such a rich and unbending sound all by her lonesome. Recently Conaway produced a string of a capella "SMASHups" stringing together tunes from local artists such as The Blind Eyes, Ellen the Felon and The Dive Poets. Not only did the project provide exposure to some of St. Louis' local treasures, but it also showcased how varied and powerful a person's voice can be. The whole exercise is mind-bending in its intricacy, but it isn't surprising an artist like Conaway makes it all look like second nature. --Jason Rosenbaum