Bonnaroo 2012: Highlights from A to Z

The tools: a 32-foot RV, VIP tickets, comfortable shoes and enough beer to take down a small fraternity.

The task: to do and see as much as physically and logistically possible at the Bonnaroo Festival in Manchester, Tennessee.

We arrived at 4:00 p.m. Thursday, excited about what Bonnaroo had to offer, but nary a clue of how to navigate the sprawling campus and the seemingly endless entertainment options. Everyone had carefully planned out his own agenda like a college semester, with the obvious difference that nothing on this schedule was to be skipped. As hard as it was to navigate through this baffling experience, it is even more difficult to organize my thoughts, so let's go with the totally non-cliched A to Z list:

A. Alabama Shakes highlighted Day 1 with a strong set that featured the powerful vocals of Brittany Howard. Howard's formidable talent and the endorsement of Jack White portend a great future for this Athens, Alabama band.

B. Black Lips ended a raucous punk rock set with Jared Swilley throwing a full can of beer in the air and knocking it into the crowd with his guitar, baseball-style, while bandmate Cole Alexander poured Jameson's whiskey into the mouths of front row patrons.

C. Childish Gambino: Donald Glover of Community may have been the most surprising show of the weekend. With clever lyrics, undeniable charisma and energy to burn, Glover rocked a crowd of at least twenty thousand, which he noted was vastly larger than the small tent where he performed in 2011. It's been a good year for Glover.

D. Dawes closed out an excellent Friday night set in The Other Tent with "A Little Bit of Everything" and "Time Spent in Los Angeles". An outstanding folk rock band with high-minded lyrics, lead singer Taylor Goldsmith is the vocal doppelgänger of Jackson Browne.

E. Environmentalism was a prominent theme throughout Bonnaroo, as litter was relatively minimal and every trash bin pleaded attendees to recycle. All of which is great, but probably doesn't do much to offset the carbon footprint of thousands of RV's getting about seven miles to the gallon.

F. Fans of Radiohead seemed generally disappointed with a set that featured many songs from the mediocre King of Limbs, several new songs and other odd, slower selections. That said, it's hard to complain about a set that includes "Karma Police", "Weird Fishes/Arpeggi", "Everything In Its Right Place" and closes with the sublime "Paranoid Android".

G. Gary Clark Jr. (not to be confused with Dale Earnhardt Jr. Jr.) put on a fantastic Sunday afternoon performance of blues/rock guitar in a light rain shower.

H. Heat was only a factor on Friday, as unseasonably cooler weather helped keep the crowds energized. Also keeping the crowd energized: meth.

I. Ironic t-shirts were in such high supply that anyone with a regular shirt was actually being ironic. 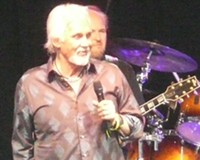 K. Kenny Rogers. It was amazing. He looked just like some of the men from menwholooklikekennyrogers.com! After wondering aloud what he was doing at Bonnaroo, he showed he was in the right place with a strong rendition of "She Believes in Me", which he declared to be his favorite song in his repertoire.

L. Loin cloths are probably not fully back in vogue, but one brave partygoer sported one with less material than a Dane Cook stand-up show.

Jump to comments
« Pulse Festival at the Old Rock Hous…  |  Out Every Night: The Best Shows Fro… »