There's gonna be a rumble next week on June 28 at Big Daddy's ( 118 Morgan St.). No Socs, Greasers or boxers will be involved. Only those with decks. A slew of talented DJS -- including D Mega, Kue, Uptown, Chulo, Who and more -- are bringing their best to the Sixty-Two Battleground. Produced by Alobars Lighting and Sound and Rane Corporation, the competition will bestow the winner with a Rane Sixty-Two Mixer. In six to twelve minute sets, the winning DJ must showcase "solid stage presence, clean mixing, scratching, originality, crowd interaction and of course the ability to keep the dance floor moving," says the evening's host, St. Louis's DJ Mahf.

"I think competition is healthy. It gets the [DJs] out of their comfort zone and really makes them step their game up." Mahf says. "Competition has always been a part of DJ culture." Alobars and Rane are not the first corporations to facilitiate a healthy rivalry. Rane has partnered with Serato to create the DMC World DJ Championship, and Red Bull's Thre3style competition gets bigger with each passing year. 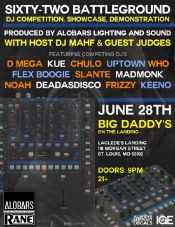 The Sixty-Two Battleground offers the Midwest a chance to highlight its microcosm of DJs. Stuck in the nation's belly, St. Louis DJs can be skimmed over. "Being from the middle of the map we have to put in extra work to prove that we belong in the ranks of some of the nation's best," says Mahf.

St. Louis bands are known to share members, help book shows for one another and show their support by attending each other's shows. The same can be said for those who spin, "There is a lot of unity in our DJ scene," says Mahf, "I would say a majority of people spinning in STL know each other at this point. We attend each other's events and collaborate on projects. Different crews like Basement Sound System work as a unit to aid each other in booking and other opportunities."

DJs in St. Louis share the same conundrums with one another, "Every DJ in St. Louis goes through experiences with shady club owners, promoters with empty promises, and the hassle of trying to spread awareness of a culture that the Midwest is the last to grasp."

The competition may be fierce, but ultimately battles like this are good for everyone involved. "Every once in a while there are shows like the Sixty-Two Battleground that bring everyone from out scene together in one room for the same cause," says Mahf. "That's a beautiful thing."