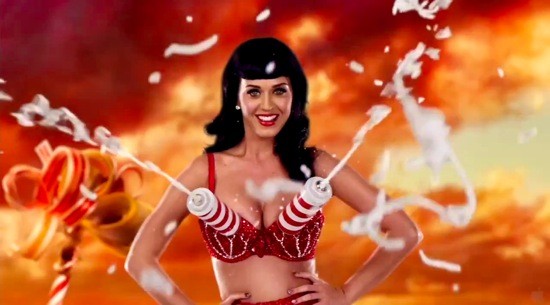 Katy Perry: Part of Me came out last weekend, and early returns are not great. Friday-to-Sunday it made $7.1 million, edged out by the month-old Madagascar 3 and Madea's Witness Protection, which is a real movie that exists. In spite of its 3D release, no movie in the Top 10 made less money per screen.

I'm not especially worried about Katy Perry, who will find some way to make it through the year regardless, but it's bad news for our dwindling supply of nationally popular musicians, because a Katy Perry movie, like Justin Bieber's similar Never Say Never, only exists because a Katy Perry song is so easy to pirate.

There aren't so many famous pop stars as they used to be, but the ones who are famous are as pervasive as they've ever been. Probably more pervasive--if you really idolized Michael Jackson as a twelve-year-old, the most you could do was join a fan club, buy some action figures, play Moonwalker on your Genesis. If you really idolize Justin Bieber as a twelve-year-old, you can become part of the army of tweeters who every day coordinate attempts to replace the names of dead celebrities and hashtags like #IllDumpMyManIF on Twitter's trending topics list with phrases like JUSTIN FANS LOVE JUSTIN.

It's social; you can, and kids do, identify yourself primarily as a Justin Bieber fan who associates with other Justin Bieber fans. You can, with the help of hundreds of other fans you know personally through Twitter and everything else, try to communicate with your idol through the social networking equivalent of those North Korean mass games performances. It is, I have to imagine, extremely fulfilling in its own way--real, human-to-human contact for something that is, for whatever reason, bigger than yourself.

It is also, unfortunately for the pop industry, not very remunerative, or at least not as remunerative as action figures and Genesis games and $15 CDs with five remixes of the same song on them. For a while, then, our pop stars have gotten more and more important in the lives of their fans while making less and less money in the deal.

Again: I won't cry for Katy Perry, who will probably be able to crash on a friend's couch for a while if this whole movie thing doesn't work out.

But I see the dilemma. And if you're wearied by the cult of celebrity personality, I'll conclude with a warning: It's only going to get worse. The ease with which superfans can find each other and mobilize is only going to increase, and the things they've traditionally been sold, mostly songs, are only getting less valuable.

Apparently absurdly glossy 3D movies glorifying the role social media plays in those pop stars' lives aren't the perfect way to monetize all those engaged tweeters, but you can rest assured that their handlers will try something else next year.