Out Every Night: The Best Shows in St. Louis from January 22 to 27 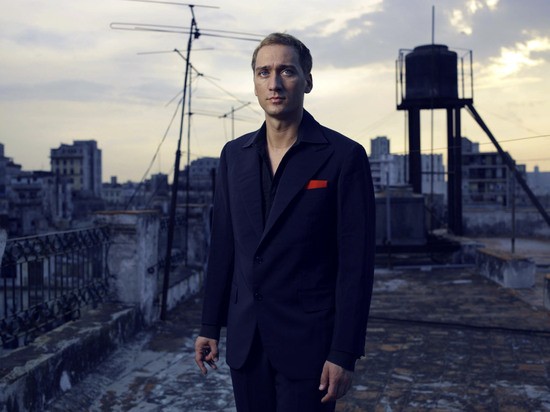 Well, I hope you enjoyed that temporary shot of springtime over the weekend while you could! Clouds are currently unloading some major snowflakes outside, but that's no reason to get left out in the cold during this week's shows. Check out Ian Fisher & the Present's CD Release and visits from Sponge, Pujol and more. Read on for the rest of this week's picks.

DJ Mahf Tues., 10 p.m., January 22 @ Pin-Up Bowl - free By RFT Staff First things first: DJ Mahf is not "just another DJ." He proved himself a bona fide turntablist when he went head-to-head with some of the nation's best DJs for the 2010 Red Bull Thre3style Competition -- where he took the St. Louis title. He's also shown that he's a capable producer with his mixtape series Homemade Junk and Press Play at Night. And when he's not out touring with Earthworms or Steddy P, he makes time to spin records all over town.

The Steel Wheels Wed., 9 p.m., January 23 w/ Kevin Buckley @ Off Broadway - $12 By Roy Kasten With a penchant for performing around a single microphone, a home near the Blue Ridge Mountains and dazzling gospel harmonies, the Steel Wheels would be the best bluegrass band you've never heard - that is, if it were playing bluegrass. With echoes of the freewheeling roots of Old Crow Medicine Show and the handsome folk of Chatham County Line, this quartet prefers mandolin and fiddle duets to brisk banjo runs, but that doesn't mean it lays back into acoustic atmospherics. Lead singer and songwriter Trent Wagler knows how to tell a country story and his band knows how to drive it home.

Ian Fisher & the Present CD Release Thurs., 8 p.m., January 24 w/ The Great Grandfathers, Beth Bombara @ Off Broadway - $8-$13 By Roy Kasten Folky peregrinators just back from Europe and - judging by their new self-titled album, hard-core Simon & Garfunkel heads - Ian Fisher & the Present (aka Ryan Carpenter) could be written off (or up) for stalking the same back-to-earnest-basics bandwagon recently ridden by the Lumineers and Milk Carton Kids. But the young duo is too accomplished - as musicians, songcrafters and harmonizers - to be set aside. The Webster University alums take a smart, sweet and refreshingly unbookish and modern approach to acoustic balladry, only occasionally dipping into the Appalachian wellsprings. Their songs glow long after the last campfire embers fade.

Mac Lethal Fri., 9 p.m., January 25 w/ Farout, Baytron, Trak Masta Tom @ 2720 Cherokee - $10/$13 By Bob McMahon From 2011: It shouldn't surprise anyone that Mac Lethal is able to improvise. After all, the Kansas City rapper won the emcee battle at the venerable Scribble Jam festival in 2002. This quick thinking came in handy when he was faced with a sparse attendance of around 40 people at the Firebird last night. After rapping a handful of songs with his hype man Patric, Mac Lethal turned a scattered crowd into an intimate one by inviting everyone to enjoy the concert from onstage. From there, Lethal did a few songs a capella including a stirring versions of venomous breakup anthems "Citrus" and "Heart of a Pig," the latter of which featured solid beat-boxing from Patric.

Paul van Dyk Fri., 9 p.m., January 25 w/ Rob Lemon, SlantE @ Europe Nightclub - $15 By Kristy Wendt From 2008: At a certain point in the night, the smoke of whatever you happen to be smoking hangs in the air in front of you due to the laws of entropy. Don't know about entropy? Don't worry, I'll explain: Entropy is the measure of a system's unavailability to do work. Still don't know what I mean? It's thermodynamics, baby. It means that after a certain point, there's so much energy in a space that it just hangs out, right in front of you, hovering in the air like the blast from a fog machine. It's the witching hour. And if you still don't know what I'm talking about, then you definitely weren't at the Paul van Dyk show last night at Dante's around midnight.

Sponge Sat., 7:30 p.m., January 26 w/ The Difference Engine, Jetliner Gypsies @ Cicero's - $17/$20 By Allison Babka There's no shortage of '90s acts touring the country in search of inspiration - or, more accurately, revenue to fund a whole new decade of flannel shirts and combat boots. But Sponge has been on the reinvention track for quite a while, shuffling band lineups and experimenting with poppier sounds instead of its trademark distorted guitar and vocals. The Detroit band's last full-length album, 2007's Galore Galore, sounds like something from Nickelback's closet, but '90s revelers shouldn't fret - fans can still revisit their own nostalgic alternativity when Sponge performs 1994's classic Rotting Piñata in its entirety at Cicero's

Benefit Concert for Tony Perolio Sat., 9 p.m., January 26 w/ Jon Hardy and the Public, The Blind Eyes, Arthur and the Librarian @ Off Broadway - free By Christian Schaeffer Tony Perolio's death last January ended a five-year struggle with Leukemia, one that weakened the body but never the spirit of the 30-year-old. He was known around the music community as the drummer for Jon Hardy & the Public, but to those who knew him well - as a son, an adoring husband, a rock climber, a Marine, an engineer - Perolio contained multitudes. On the one-year anniversary of his passing, his bandmates in the Public are hosting a free show, with donations going to the Leukemia & Lymphoma Society

Pujol Sun., 7:30 p.m., January 27 w/ Diarrhea Planet @ Off Broadway - $10 By Josh Levi From 2011: Daniel Pujol is a man of many talents. Whether he's completing his degree, playing ragers at SXSW, putting out records or writing poetry in an online series with his girlfriend, Pujol remains a vital voice for the hustling world of evolutionary rock & roll. Checked by tastemaker Jack White and his Third Man Records imprint, Pujol continues to propel forward with his latest release, United States of Being on Saddle Creek. After years of playing with a rotating cast of talented musicians, he has landed on a line-up consisting of bassist Daniel Severs and former St. Louisan Stewart Copeland. Both on record and in life, Pujol offers a unique view into the life of contemporary America, always on point and never at a loss for words.