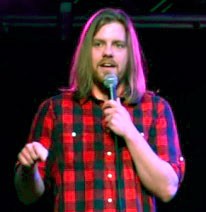 Treemen - A compound noun made up of the words tree and semen that is used to describe certain pollinating plants whose odor strongly resembles ejaculate. (These trees are in full bloom right now in St. Louis, btw.)

The term above and its definition comes (ahem) courtesy of St. Louis comedian Jon Venegoni who bested three other finalists last night at Plush to win RFT's 2013 Standup Throwdown.

If you didn't make the show, you missed out on a lot of laughs from Venegoni and our other Final Four contestants: Nick Branson, Conor Hovis and semifinalist Emily Hickner.

RFT would like to extend special thanks to Jovan Bibbs for his very funny performance last night and to our judges: Chris Ward (St. Louis' "Funniest Tweeter"); comedian Jeremy Essig (who's performing this weekend at the renowned Cobb's Comedy Club in San Francisco); last year's RFT Standup Throwdown winner, Erik Anker; and RFT's own Leetah Nickel. And special, special thanks to our host/organizer Kelsey McClure.

We put this contest on in an attempt to both acknowledge and showcase the tremendous comic talent working right here in St. Louis. So, congratulations to all sixteen comedians who qualified for this year's competition. Here's hoping you -- and others -- will enter again next year.

Thanks, too, to Pounds Media for putting together for following video of last night's throwdown.