Kendrick Lamar Brings the House Down at the Chaifetz Arena 4/17/13: Review and Setlist 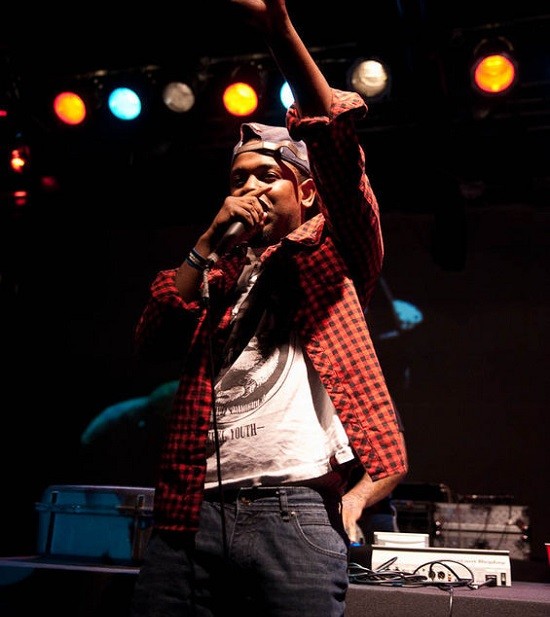 Compton's new "King of West Coast Hip-Hop" (so dubbed by the likes of Dr. Dre, the Game and Snoop Dogg) made a stop in St. Louis last night to a packed Chaifetz Arena. The prodigious, fan-favorite rapper was welcomed by a rabidly excited crowd, and he performed with the confidence of a veteran, rather than a relative newcomer.

See Also: -Kendrick Lamar's Debut is One of the Most Important Hip-Hop Albums of Our Era

Upon making it past security, I entered the Chaifetz Arena somewhat confused. The combination of the building layout and the members of the crowd surrounding me gave the atmosphere of a pep rally before the big homecoming game. That's not meant to be mistaken as jaded and/or too cool for school (literally in this case, as the show was at Saint Louis University). I was simply swept up in the moment with the mindless "Woo!" and "Threes up!" chants this young-but-not-too-young crowd was throwing out. This show was like a really fun prom/sweet-sixteen-type party. It chock full of neon assholes, dressed-down nerds and legitimate hip-hop fans. They were all ready to party, and everyone got along fine with one another.

To my surprise, there was an opening act, Bad Rabbits. The band sounded like the theme song from Men In Black, if it were 45 minutes long, wouldn't stop pogo-ing, and had double-bass breakdowns. That's not to say that it wasn't good -- this set of silly-but-earnest funk just didn't match up to the hype of either headliner Steve Aoki (mild hype), or the real reason people showed up, Kendrick Lamar (all the hype). Bad Rabbits' set brought to mind that long-cliched scene from teen movies about starting bands. You know the one: It's at the end, when the band nobody believed in finally gives all the naysayers their comeuppance, and the random supportive characters do their callback jokes to other shitty jokes in the movie. The set was like that, but a couple years down the road, after hitting the wedding-reception circuit.

The most memorable thing during this set was when their singer (who was wearing a dashiki) got everyone to throw one hand up. Now, this is very standard concert crowd interaction, if the hands in question don't resemble a crowd full of "seig heils." These (very uncoordinated) ones did. Little to Dashiki Hitler's lack of self-awareness, and the crowd's, the most ironic Reich of all time almost formed accidentally in the middle of a (presumed) basketball floor while their fearless/clueless leader did the MC Hammer dance across the length of the stage as a closer.

A few minutes later, an average hype-up /iTunes playlist of random 2 Chainz/Rihanna/other club rap /R&B that TDE (Top Dawg Entertainment) blared out of the PA, getting the crowd all riled up. I encountered a wild tribe of upright-walking mammals that we will refer to here as the "tank top posse." Watching these creatures fail to attract mates with their off-time presentation technique was entertaining, and it boosted my confidence -- at least I'm not the biggest dork here. About fifteen minutes went by as I watched the tribe fail to attract anyone else, even after waving their iPhones in the air during the mating dance.

Suddenly. the lights went down and a chilling invitation echoed from the PA: "Everybody, everybody. Everybody...everybody sit your bitch ass down and listen to this true mothafuckin' story told by Kendrick Lamar on Rosecrans, ya bitch!" And the crowd went apeshit.