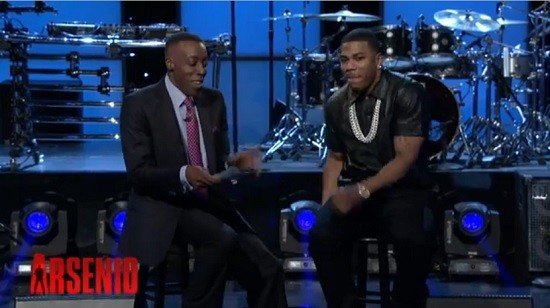 Cards fans, Nelly fans, fans of Arsenio Hall: This is delicious. On Tuesday of last week, Nelly made an appearance on the Arsenio Hall Show to promote his latest album, M.O., right in the midst of the Cardinals-Dodgers series for the pennant.

Hall began the interview proclaiming that the Dodgers, "his team," would triumph over the Cardinals, and challenged Nelly to a bet. If the Dodgers won, Nelly was to return to the show tonight and perform his breakout hit, "Country Grammar," dressed in a Dodgers uniform. Nelly agreed: "It's gotta be Jackie Robinson, though," he insisted, to Hall's approval. If the Cardinals won, however, Hall was to perform the song himself, wearing a Cardinals uniform -- Ozzie Smith's, at Nelly's insistence.

Well the dust has settled, and I think we all know how that turned out.

Nelly will return to the show tonight to collect on the bet. Tune in to KTVI FOX 2 at 11:00 p.m. to catch the performance. Check out the video of Tuesday's exchange below, and check back here tomorrow; we will post a clip of the performance as soon as it is up: