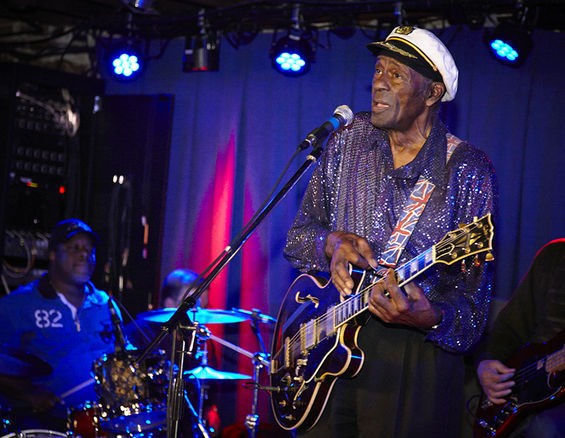 Players and fans alike were humming "Hail! Hail! Rock & Roll" during Wednesday's Cardinals game, as the team honored music legend and St. Louis native Chuck Berry with his own bobblehead. The 87-year-old Polar Music Prize recipient accepted his plastic likeness in person and also threw out the ceremonial first pitch before the Cards conquered the Arizona Diamondbacks 3-2 in extra innings.

See also: - Chuck Berry Will Be Awarded Prestigious Polar Music Prize This Summer - The Best Moments of Chuck Berry's 200 Shows at Blueberry Hill, as Told By His Bandmates

Fans and media outlets with no particular place to go flocked to Twitter to talk about the convergence of their two favorite things: the father of rock & roll and baseball. Take a peek:

We're so excited we got to get a quick pic with the one and only, Chuck Berry! It's Chuck Berry Night at Busch! pic.twitter.com/7dZm8onAn9

It's not every day that you can give your Chuck Berry bobblehead to Chuck Berry. #johnniebegood

Not much "throwing" is happening here, actually:

Ahhh, there's that pitching arm we've been waiting for:

Chuck Berry will turn 88 this October, but the Rock-n-Roll legend has still got the moves--showing off while throwing out the first pitch.

And for that, he earned the "cool play of the game." Watch out for Fredbird, though -- he's got a sex tape!

Chuck even participated in the silly between-innings stunts:

BREAKING: Busch Stadium is rocking out to Johnny B. Goode. Chuck Berry is at the @Cardinals game! A living legend!! pic.twitter.com/w4MsC0ARWf

Chuck Berry getting lots of love from the Busch crowd between innings. #STLCards

Not everyone was thrilled with the Berry-centric game, though:

@cassity23 How come Chuck Berry gets a night but Matt Holliday doesnt?

"Chuck Berry Bathroom Cam" giveaway would be way more appropriate than a bobblehead night, but maybe that's just me.

I'm a little scared to use the restrooms with Chuck Berry here. I'm holding out for a Johnnie Johnson bobblehead. That would be so cool.